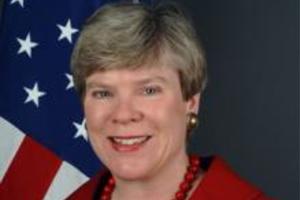 Rose Gottemoeller, U.S. Assistant Secretary of State and chief negotiator of the New Strategic Arms Reduction Treaty (START) between the U.S. and Russia, will speak at the University of Notre Dame at 4:15 p.m., Sept. 21 (Tuesday), in the Hesburgh Center for International Studies Auditorium.

Gottemoeller will provide an insider’s view of negotiations toward a treaty to reduce nuclear arsenals, which was signed by Barack Obama and Dmitry Medvedev last spring. The Senate Foreign Relations Committee is scheduled to vote on ratification of the treaty on September 16.

Respondents to the lecture are Colonel Richard Klass of the Center for Arms Control and Non-Proliferation and Ira Helfand, M.D., of Physicians for Social Responsibility.

Join us for a discussion of the terms of the new treaty, its impact on relations between the United States and Russia, and its implications for U.S. and international security. Gottemoeller also will address the Obama administration’s nuclear security agenda and its efforts to secure nuclear materials and reduce nuclear stockpiles globally.

This event is free and open to the public. It is sponsored by the Center for Arms Control and Non-Proliferation, Physicians for Social Responsibility, and Notre Dame’s Kroc Institute for International Peace Studies.