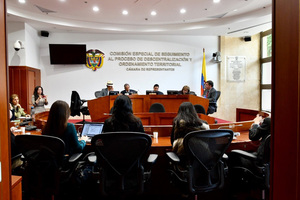 A team led by prof. David Cortright discusses the Peace Accords Matrix with members of the Colombian congress.

David Cortright of Notre Dame's Kroc Institute for International Peace Studies kept one of his most important meetings in Bogotá this morning in a week crowded with important appointments and developments.

Today's meeting was with Msgr. Hector Fabio Henao, director of the Pastoral Social of the Colombian conference of Catholic bishops.

The Church's role in ending 50 years of conflict in Colombia cannot be understated. It helps explain why the University of Notre Dame is playing so central a role in the peace process, and why the first thing that nominally Marxist revolutionaries request after abandoning their mountainous redoubts is to have a priest baptize their children.

Using the project's "barometer," monitors are able to detect early on if peace implementation is slipping, or advancing, compared to other conflicts at crucial points.

Cortright's early assessment is that Colombia is in good shape. For one thing, the ceasefire has held. For another, the FARC has promised to surrender its weapons in the next 20 days. This, after being assured that its fighters will be protected from reprisals and imprisonment as long as the guerrillas confess their crimes and make some sort of victim restitution.

Cortright delivered his confidential report to the Colombian government last night. He is briefing people like Msgr. Henao in general terms today, and the senior staff of the Senate and House Foreign Relations Committees in Washington on Monday.

While Cortright remains tight-lipped on specifics, broad indicators emerged last night at La Javeriana University where he valiantly elected to deliver his half of the inaugural Hesburgh International lecture in obviously novice Spanish.

By contrast, Notre Dame law professor Doug Cassel, who played a pivotal role in the last two years of torturous treaty negotiations, slipped into fluent Spanish like an old shoe, and opened by telling his listeners that they may be wondering what a "Yankee" was doing in middle of Colombia's peace negotiations.

The short answer is that Cassel is a lawyer and expert on international human rights. With that, Cassel gave the audience more insights into the complicated, arduous treaty process than many had ever heard publicly before.

You can't go far in Bogotá without encountering someone or someplace touched by the violence of the last five decades.

Cortright and Cassel dined Tuesday night with Notre Dame alumni at the private Club Nogal, which the FARC targeted in a car bombing that killed 36 and wounded 200 in 2003. One alumnus present had been kidnapped by the FARC. So had his father, and an uncle.

Critics of the treaty consider the terms for FARC tantamount to amnesty and that's a bitter pill for many Colombians. Cassel painstakingly explained to his La Javeriana audience the difference between the blanket amnesties of other conflicts, like South Africa, compared to a system of graduating sanctions in the Colombia accords.

The Notre Dame team thinks Colombia has assembled the right elements for a lasting peace. But there have been setbacks.

Land reform, another aspiration of the accords, is a long way off. The approximately 80,000 farmers engaged in coca production are slow to adopt legal, alternative crops. Cortright said it was important for the Colombian government to create markets and subsidize legal alternatives.

Cortright was received favorably earlier this week in Bogotá by European Union and United States officials in his quest for support for more observers on the ground. Right now, Cortright is working with a team of just eight.

The coordinator of the Kroc Institute’s implementation team on the ground here said, “I’m an optimist. You have to be in this line of work”.

Cortright's assessment: So far, so good.

Produced by the Office of Public Affairs and Communications.