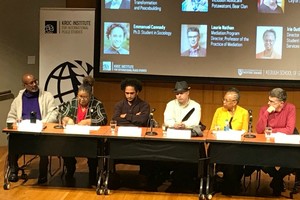 The conversation was convened by the Kroc Institute for International Peace Studies’ Mediation Program and moderated by David Anderson Hooker, Associate Professor of the Practice of Conflict Transformation and Peacebuilding. It included five panelists from across Notre Dame and the greater South Bend community. The event was part of Notre Dame’s Walk the Walk Week events in observance of Martin Luther King, Jr. Day.

In his opening remarks, Hooker shared a definition for whiteness as a social construction drawn from Ruth Frankenberg: “Whiteness is the location of political advantage. It’s a snapshot. A place from which so-called white people look at themselves and others. Or it could be understood as a cultural practice that extends unmarked and unnamed privileges.”

Hooker reminded the audience that the kind of whiteness being discussed was not explicitly racist manifestations of violence and prejudice that are generally not tolerated, but rather “the forms of whiteness that are in operation [on the university campus] and have a way of equally damaging the environment in which we exist. … Whiteness and its performative requirements impede the full human flourishing of everyone.”

Hooker invited panelists to share their understandings of the notion of whiteness and also to reflect on possible ways of addressing whiteness on the Notre Dame campus. He also invited panelists to reflect on experiences or places on the Notre Dame campus where they have encountered white privilege in operation in ways that might not be immediately apparent or obvious to white people themselves.

Ballew referenced the history in the United States and at Notre Dame of the genocide and displacement of indigenous people. Ballew is a descendent of the Potawatomi tribe members who were the original inhabitants of the land where Notre Dame is now located. He encouraged audience members to think seriously about the harm perpetrated against Native Americans and the continuing long-term impact of these actions.

“The U.S. is the only civilized nation yet to sign the Geneva Convention against genocide,” he said. “What would happen to America if held responsible for the lives of the 70 million indigenous people who were killed?” 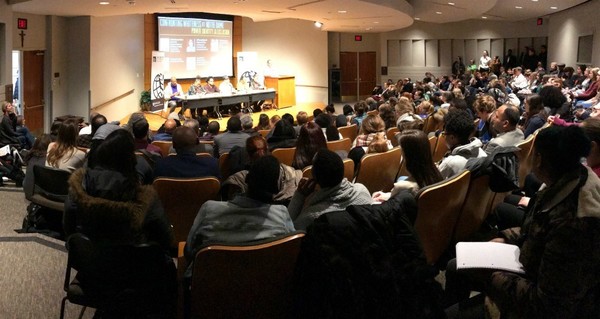 The Hesburgh Auditorium was filled to capacity for this important panel discussion. An additional 40 attendees watched the conversation from an overflow room.

“There's a sense that whiteness and being American are interchangeable, so when you hear political leaders talking about Americans, you always have to wonder, Who are they really talking about? Does it include my experience?” she said. “We have to hold leaders accountable for that.”

Several panelists encouraged white people in the audience to continue educating themselves about, and working to undo, structural racism. Outlaw encouraged white attendees to ask themselves how they were using their privilege to be an ally to people of color. “If you are white and you are an ally, you have a seat at the table. What are you doing to open up space? Are you opening up space so that people of color can be at the table and speak for themselves?” she said.

Cannady encouraged white audience members to jump in and begin the hard work of dismantling whiteness and working for racial justice despite any fear they might feel.

“You don't have to be perfect in this work. You just have to show up,” he said. “And you do have to be able to eat a piece of humble pie when you make a mistake and say, ‘You know what, I really messed up.’”

The conversation closed with over 45 minutes of discussion amongst the panelists and the audience.

Both Nathan and Asher Kaufman, the John M. Regan Jr., Director of the Kroc Institute, emphasized that the Institute plans to continue to promote conversation, research, and practice focused on race and justice.

“For scholars and activists who work on peace, the issue of justice is critical,” said Nathan. “Peace in the narrow sense as the absence of direct physical violence is not sufficient. We are also concerned with the absence of structural violence. Although the new mediation program at Kroc has a global focus, we think that it would lack integrity if we ignored our own environment. We convene conversations that are at once vital, sensitive and difficult.”

A video recording of the panel discussion is available upon request by e-mailing Hannah Heinzekehr, hheinzek@nd.edu.