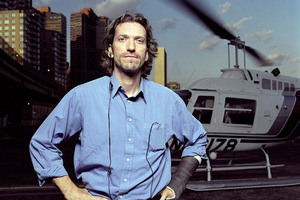 Human rights activist John Prendergast will speak about his time in Africa’s war zones and how to end the genocide in Darfur on Thursday (Sept. 18) at 12:30 p.m. at the University of Notre Dame’s Hesburgh Center for International Studies.

Prendergast also will attend a screening of the new film “Darfur Now” the same evening at 7 p.m. in the Browning Cinema of Notre Dame’s DeBartolo Performing Arts Center.The film explores the Darfur conflict through the experiences of six heroic people.

The author of eight books, including the New York Times best-selling Not on Our Watch, which he co-wrote with actor Don Cheadle, star of the film “Hotel Rwanda,” Prendergast is co-chair of the ENOUGH Project, an initiative to end genocide and crimes against humanity. He has helped produce two documentaries on Northern Uganda and been involved in three documentaries on Sudan. During the Clinton administration, he was involved in a number of peace processes while he was director of African affairs at the National Security Council and special advisor at the U.S. Department of State. He has worked for members of Congress, the United Nations, human rights organizations and think tanks.

Both are free and open to the public, but tickets are required for the film and may be reserved by calling 574-631-2800.