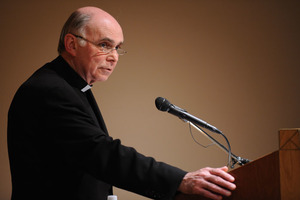 Twenty-five years ago, Hehir was the chief architect of the U.S. Catholic bishops’ influential statement on nuclear weapons, “The Challenge of Peace.” He is the Parker Gilbert Montgomery Professor of the Practice of Religion and Public Life at Harvard University’s Kennedy School of Government.

Hehir will speak on “Beyond the ‘Challenge of Peace’: Pastoral Letter for Our Day,” March 25 at 4:15 p.m., in the auditorium of the Hesburgh Center for International Studies. The lecture will be followed by a reception in the Great Hall.

He will speak on “The Hardest Case: The Politics and Ethics of Proliferation” March 26 at 12:30 p.m., also in the Hesburgh Center auditorium. David Cortright, an expert on nuclear weapons policy and a research fellow at Notre Dame’s Kroc Institute for International Peace Studies, will respond.

Both lectures are free and open to the public.

Hehir previously served as president and CEO of Catholic Charities USA. In the 1980s, he was policy advisor to the U.S. Catholic Conference of Bishops in Washington, D.C. He also has served as the Joseph P. Kennedy Professor of Christian Ethics at Georgetown University's Kennedy Institute of Ethics and as a professor in religion and society at Harvard Divinity School.

Hehir is the recipient of numerous honors, including a MacArthur Foundation “genius” award (1984) and honorary degrees from more than 25 institutions. He has written extensively on ethics and foreign policy, Catholic social ethics and the role of religion in world politics and American society. His publications include “The Moral Measurement of War,” “Military Intervention and National Sovereignty,” “Catholicism and Democracy,” “Social Values and Public Policy,” and “The Moral Dimension in the Use of Force.”

The annual Hesburgh lectures were established by the Kroc Institute in honor of the Rev. Theodore M. Hesburgh, C.S.C., president emeritus of Notre Dame.