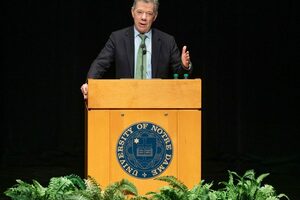 Former Colombian president Juan Manuel Santos, who led the signing of the historic 2016 Colombian peace agreement and was awarded the Nobel Peace Prize for his efforts, shared insights on peace processes, leadership, and conflict transformation with Notre Dame students and faculty during a weeklong visit at the Keough School of Global Affairs.

Santos, a distinguished senior policy fellow of the Keough School, delivered the 29th Hesburgh Lecture in Ethics and Public Policy on September 13. He is the third Nobel laureate to give this annual public address, a signature event of the Keough School’s Kroc Institute for International Peace Studies.

In his introductory remarks, Marilyn Keough Dean Scott Appleby praised Santos as a “courageous and visionary statesman” who led his country through an arduous peace process that began with the signing of the Colombian Peace Agreement on November 24, 2016—a major turning point in ending the country’s 52-year armed conflict. The monitoring of the  implementation of the accord is carried out by the Kroc Institute’s Peace Accords Matrix (PAM) Barometer Initiative, as stipulated by the agreement.

Speaking to a packed theater at Notre Dame’s DeBartolo Performing Arts Center, Santos spoke to the complexity of peacemaking and traced his evolution from a hawkish statesman to a champion of peace and reconciliation.

“Building peace is much harder than making war,” Santos said. “I made a tremendous effort to treat my enemies as human beings, to call them not enemies but adversaries. Enemies, you eliminate, but adversaries—you defeat them but have to live with them for the rest of your life, earn their respect, and protect their human rights.”

A willingness to change course is a vital trait for leaders today, Santos said. During his time as president, his own attitude about the environment, for example, transformed from one of indifference to one of passionate advocacy. He credited Indigenous communities in Colombia, the most biodiverse country in the world per square kilometer, for helping to open his eyes to the urgency of the climate crisis.

“If we do not make peace with Mother Nature, we will all perish,” Santos said.

Santos also described his decision to change tactics in his administration’s war on drug trafficking in Colombia. Once convinced that a hardline stance was his only option, as Minister of Defense he eliminated record numbers of coca plants and extradited nearly 1,500 drug traffickers to the United States. But when these methods proved ineffective, he began to change his views.

“We will never be able to stop people from consuming drugs, but we can take the violence, corruption, and money out of the markets. We changed the means, but not the ends,” Santos said.

Speaking directly to the Notre Dame students in the audience, Santos urged them to step into leadership roles, despite the many daunting challenges ranging from endangered democracies to the existential threat of climate change.

“Be successful in making a difference, in creating a more inclusive, tolerant, and loving world, even if that means changing your course,” Santos said. “Let it be said about you that one life has breathed easier because you have lived.”

In addition to his public lecture, throughout his time on campus, Santos met with master of global affairs, PhD, and undergraduate students in several class sessions and shared meals. In one master of global affairs class, he engaged in conversation with renowned peacebuilder John Paul Lederach, professor emeritus of international peacebuilding at the Kroc Institute, and Josefina Echavarría Alvarez, director of the Peace Accords Matrix.

Santos concluded his visit by attending a Notre Dame football game against University of California, where he was recognized on the field at halftime with an award given by Appleby on behalf of the university.