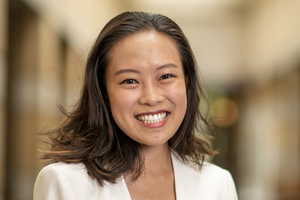 You went to Notre Dame for your undergraduate, then on to Harvard Divinity School for your Master’s. What drew you back to Notre Dame?

That’s a good question. I think the biggest part was the possibility for interdisciplinary work, which fits really well into my own intersectional interests. Being in two departments at once allows me to use the tools and methods of one to critique the tools and methods of the other, and vice versa. Remaining in one field, it would be harder for me to critically reflect on my own position as a scholar within the often un-critiqued dynamics of power and violence in academic scholarship. Also, the professors here are really caring, which I sensed a lot as I was coming back.

Can you tell us one of your favorite classes from your time at Notre Dame?

I feel like, if this gets published, I would break a lot of hearts. People will be asking: ‘It wasn’t me? What?’ There are so many because I had so many majors and minors in undergrad. Let’s make it relevant to peace studies. The one that probably impacted my views the most was the class I took my junior year with Asher Kaufman [John M. Regan, Jr. Director of the Kroc Institute and Professor of History] on memory, history, and violence in the Middle East. That was my first memory studies course and, even though I’m not from the Middle East, it changed the way I view the many different places I have lived. It gave me a critical lens for looking at all narratives: the different narratives and politicization of memory as different histories are recounted in museums, textbooks, popular media, everything. I really appreciate that.

You grew up in China and came to the U.S. for college. As an undergraduate, you traveled to Kolkata, Shanghai, and Jerusalem. Have these international or intercultural experiences affected your research interests or views on peace studies?

One strand that connects all of my experiences—including my own family history—is the presence of trauma. That is what drew me into peace studies and theology: looking at how those narratives around trauma form and how they cause lament or more violence, whatever the post-traumatic and post-conflict society looks like. That was really interesting.

Do any of the experiences you have had stick out in your mind or come back to you when you are exploring these different issues?

When I spent my senior year spring break in El Salvador, it was to study local liberation theologies and the history of the Salvadorean civil war. It was technically called a pilgrimage, and I remember visiting different sanctuary spaces and seeing that many religious imageries in El Salvador are actually imageries of people who had lived through the civil war—their experiences of torture or violence. And hearing the stories of mothers who had lived through the civil war was definitely a striking, intense, emotional experience. Having all of that at once really got me thinking a lot about embodied memory, including specifically gendered experiences of violence, as it pertains to sanctuary spaces and liturgical memory in local theology. That’s one thing I definitely am still holding onto. It influences the way I look at theology and the way I read books today.

When you refer to liturgical memory, what does that entail?

Within theology itself, my focus is liturgical and sacramental theology, which studies the symbols, rituals, and religious spaces and sanctuaries of religious communities. And not just Christianity. That is very important to me because, when we think of theology, we often think of books, but not every community—especially post-violence communities in the Global South—has access to dense volumes of philosophy or theology. I love looking at how theology is lived and created through rituals by local communities, even if they’re not professional theologians. For me, that’s where theology comes from. So that’s what I mean by liturgical memory: how these rituals reflect and transmit peoples’ memories about their pasts.

Are there any rituals you have learned about that strike you as particularly notable or beautiful?

I’ve been reflecting a lot on different rituals that emerged from religious communities during the HIV/AIDS Crisis in the 80s and 90s. Especially during this pandemic, when we have digital rituals for people who have died of COVID or rituals that had to be altered because of the nature of the pandemic. One in particular is the AIDS Memorial Quilt and the reading of names. To me, that is something deeply theological and reflects a lot of Catholic and ancient Christian theological practices of calling upon the names of the dead. There is something prophetic about these rituals that commemorate the lives of those who are otherwise forgotten or despised or seen as unworthy of commemoration by society and its structures of power.

Between peace studies, theology, literature, and political science, you have a really wide range of academic interests. How do you see all of these interests working together?

I don’t know yet. I guess we’ll see. But I think all of them are insufficient, and that’s what I hold onto when I work with or from all of these disciplines. Peace studies is insufficient because it emerges from a history of war and emerges mostly from the Western world. Theology is insufficient because it still upholds different notions of Christian supremacy and frames Christianity as normative, which has led to centuries of colonization and imperialism. Political science is insufficient because it focuses on political structures rather than actual change. And literature is entirely subjective. Beautiful, but subjective. Every discipline has weaknesses, but I think that’s what drives them together: the ways they can critically examine each other. That continual noticing of insufficiencies compels me to work with all of them and to become, hopefully, a better scholar who can better engage with violence and peace within academia itself.

As an undergraduate, you organized a fellowship group for Chinese Catholic students and faculty, went to Shanghai exploring the memories of Catholic persecution there, and wrote a thesis on religious nationalism in the Middle East. There seems to be a strong link for you between religion and the idea of ‘home’. Is that a deliberate connection?

No. I haven’t really thought about the idea of home before, to be honest. I went to twelve different schools in my life. Which is a lot. More than most people. So I never lived in the same place for more than like three years, because that was my family. My dad is a professor and we moved from one college town after another. It was fun, but definitely an interesting life experience.

Religion is something that I have thought about before and I feel, like most people, that I have a very complicated relationship with religion. It’s something that grounds me in hope and gives me a ritual language to live by, but also gives me a lot of trauma. So I think I study a lot of things related to religion because I am still looking for a home. You know? But maybe I’ve given up at this point. Religion just raises these really fascinating questions for me all the time. At one point I was asking the questions: What does belonging look like for me in a religion? What does belonging look like for me in a place? But, at this point, I have almost stopped caring about belonging. I’m just here.

What does your father teach?

So you followed in his footsteps.

Oh, completely. When I told him I was going to Notre Dame, he was like ‘So, Mendoza?’