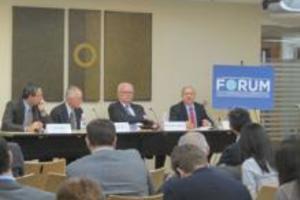 One week before senior U.S. and North Korean officials will meet for the first time since the death of long-time leader Kim Jong, Il, two leading experts on North Korea urged U.S. officials and policymakers to undertake a strategy of engagement with Pyongyang — on a wide range of regional security issues — as an important step toward restraining nuclear proliferation.

Ambassador Stephen Bosworth, U.S. Special Representative to North Korea from 2009 through October 2011 and dean of the Fletcher School of Diplomacy at Tufts University, and George A. Lopez, who served on the UN Panel of Experts for North Korea between October 2010 and July 2011 and who is the Hesburgh Chair of Peace Studies at Notre Dame’s Kroc Institute for International Peace Studies, spoke at the forum, “Sanctions, Incentives, and Denuclearization: Options for Engaging the New Kim Regime in North Korea.” About 75 current and former government officials and policymakers participated in the forum at the Fourth Freedom Forum in Washington, D.C., on February 16.

“We can’t expect immediate progress on denuclearizing North Korea," said Lopez. “The U.S. faces a much steeper climb this time. It’s critical that we be willing to address many of the issues that divide the North from the rest of the world rather than concentrate narrowly on the goal of immediate denuclearization.”

Denuclearization has never occurred in any country without a general security pledge toward that country, Lopez said.

“If North Korea were to gain a stake in cooperating for regional cooperation, and to see that their security and the regime’s survival are enhanced by giving up nuclear weapons, they might be more amenable to bargaining over nonproliferation issues. A North Korea without nuclear weapons opens the door to enhanced economic opportunities with the wider world that will benefit everyone.”

Major changes in North Korean policies are unlikely in the near future, according to Bosworth and Lopez. While prospects for substantial steps toward denuclearization are low, resumption of the six-party talks (meetings between North Korea, South Korea, China, the U.S., Russia, and Japan that began when North Korea withdrew from the Nuclear Nonproliferation Treaty in 2003) may be possible and would be step in the right direction. Sanctions have had some effects in constraining the importing and financing of weapons, Lopez said, but they have not prevented North Korea from developing nuclear weapons capabilities. The history of nonproliferation shows that countries give up nuclear weapons on the basis of cooperation and security assurances — not in response to punitive sanctions.

On February 23, U.S. Special Representative for North Korea Policy, Glyn Davies, is scheduled to meet with North Korean First Vice Foreign Minister Kim Kye Gwan in Beijing This will be the first high-level contact between the two countries since the death of North Korea's longtime leader, Kim Jong Il, and the transition of power to his son Kim Jong Un.

The Sanctions & Security Research Program is a partnership of the Fourth Freedom Forum and the University of Notre Dame’s Kroc Institute for International Peace Studies. For 20 years, the program’s sanctions experts have provided research and policy advice to United Nations, European, and U.S. policymakers on the effective use of targeted sanctions. Researchers have published eight books, 29 reports, and more than 50 articles in publications such as Arms Control Today, Foreign Affairs, and Foreign Policy.