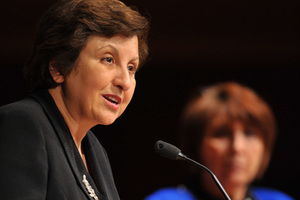 Speaking to about 700 people at Notre Dame on April 23, Nobel Laureate Shirin Ebadi called on scholars, students, people of faith, elected officials, and citizens everywhere to stand up for human rights in Iran, the U.S., and around the world. A lawyer and human rights advocate, Ebadi spoke as the Kroc Institute’s 15th annual Hesburgh Lecturer in Ethics and Public Policy.

A sampling of remarks from her lecture and meetings with students and faculty:

“Winning an election does not mean democracy. The elected should get their legitimacy not just from the ballot but from respect for human rights.”

On human rights and Islam

“International principles of human rights have nothing to do with east or west. It doesn’t matter if the followers are Christian or Muslim. . . . Some people say Islam is not compatible with democracy and human rights. I do not accept this theory.”

On religion in government

“It is impossible to try to rule the world on the basis of religious beliefs. We have to start with principles that are accepted by everyone, not only accepted by us.”

On the women’s movement

“The strongest movement in the Middle East right now is feminism. . . . In Iran, many, many more people have joined the movement, and we have succeeded in changing some of the laws against women.”

On bringing change to Iran

“The improvement of democracy and human rights in Iran is the responsibility of the people of Iran. It has nothing to do with foreign soldiers. I not only oppose an attack [from the U.S.], but I oppose the threat of an attack on Iran. I deeply believe that democracy cannot be brought to a country with bombs.”

On working for peace

“War and peace are globalized. You can’t sit in one corner of the world and say, ‘well, they are having a war there.’ The fate of human beings is intertwined. If we want peace, we have to work for peace in all corners of the world.”

On support for moderate Muslims

“There are many moderate Muslims. They have no headquarters, no leaders, no organized groups. Their faith lives in their hearts and minds. . . .Help broadcast their views in the world. Translate their books into English. Give people the opportunity to study Islam. The West fears Islam because it does not know Islam.”

“We need dialogue on three levels: the heads of state, the parliaments, and civil society. And dialogue not just on nuclear issues but on all issues, especially human rights.”

On the role of faith

“Faith gives me direction for my work, because the basis of faith in Islam is justice. I’ve been threatened to death several times, and once my execution was ordered. It is not easy to live with this. But when I think of God watching me I become very encouraged.”

On winning the Nobel Peace Prize

“I was surprised to win the prize when I did. Naturally, it means more work, but also more impact. The prize gives me more loudspeakers so more people around the world can hear me now. . . .I hope one day one of you students will win the Nobel Peace Prize.”