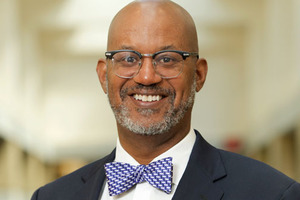 For over thirty years, David Anderson Hooker has worked with communities, local, state, and national governments, international NGOs, and civil society organizations on post-conflict community building and reconciliation, trauma healing, environmental justice, and public policy. Additionally, Hooker brings expertise as a lawyer and Masters in Divinity to his classroom teaching as an Associate Professor of the Practice of Conflict Transformation and Peacebuilding at the Kroc Institute.

This past summer, Hooker traveled widely to test and refine his ideas of how narrative structures determine how we think, learn, and interact with others, profoundly affecting us from an early age. “We learn these narratives from children’s stories and games, from watching our parents, from our schooling and other socializing institutions, and from scriptural and symbolic cultural references.”

From South Sudan and South Africa to North Carolina, Switzerland, and California

Hooker traveled first to Juba, South Sudan with a group called Viable Support to Transition & Stability (VISTAS), a USAID-funded program focused on sustainability and the viability of communities. One of VISTAS’s projects is a program called Morning Star, a derivative of the Strategies for Trauma Awareness and Resilience (STAR) Program based at Eastern Mennonite University in Harrisonburg, Virginia. In the Morning Star curriculum, Hooker incorporated the role of narrative in healing trauma and in accessing the power of spirituality and the arts. He asked: How do we use art and ritual for peacebuilding? And, how do we get community members to employ these practices in ways that embed narrative and symbolic forces within their daily interactions in ways that push towards peace and wholeness in community?

As an example of how he and his colleagues are adapting an adult curriculum for children and youth, Hooker described how they are inviting the local trainers to modify familiar stories, myths, games, and songs to replace traditional narratives of war with those modeling peace and justice. The process, he said, is a delicate balance of pointing out how existing societal roles—especially for women and children—can be modified in an inviting way that results in useful transformation. The local Morning Star Master Trainers went out to various parts of the country to pilot test the modified curriculum they convened with Hooker and other again later in the summer to share feedback, and in the coming year will test and further refine it. Hooker will periodically visit South Sudan to check on progress.

The ongoing work in South Sudan has become connected to Hooker’s work in Cape Town, South Africa, where he attended the first official convening of the Reference Group on Mental Health, Psychosocial Supports, and Peacebuilding. The impetus for such a global gathering of scholars and practitioners is to examine how each discipline (MH, PSS, and PB) can inform the others in a strategic, holistic, and integrative manner.

Alert to the eventual termination of the Morning Star program, Hooker will work with one of the co-conveners of the Reference Group in the coming year to look for ways to integrate the trauma healing and restorative justice theories and practices of Morning Star framework within other peacebuilding actors presently working in South Sudan. The overall intention is to find multiple opportunities to infuse trauma healing, mental health and psychosocial support practices within several peacebuilding efforts and evaluate the contributions of the integrated approaches. In September, the investigation began into how to transition the Morning Star frameworks into a sustainable, integrative model. The Reference Group will then be able to evaluate results and decide what approaches to urge others to implement.

This past summer, as he has done for the past several years, Hooker attended the Summer Institute for Reconciliation offered by the Duke Divinity School. There, he facilitates a conversation examining the narratives that shape identity, those that create the basis for broken relationships, and the narrative structures that support reconciliation. Participants consider children’s stories, songs, media accounts, myths, folk history, and family legacies (and family secrets) to unveil previously unconsidered narratives. This summer, Hooker introduced his concept of “valences of identity,” a drawing from quantum physics term that moves away from the notion of a single unified identity to one comprised of many socially-constructed ones.

“‘Valences’ captures the sense that not all of our identities are salient at the same time, with situations eliciting certain negatively or positively charged aspects of our identity,” said Hooker. At Duke, among the many sources of narrative, he and his group examine both common and uncommonly referenced scriptural models of reconciliation to notice how those narratives guide performance and expectations during efforts towards reconciliation.

Next on Hooker’s summer itinerary was Caux, Switzerland, and the Initiatives of Change (IOC) Conference. Originally convened after World War II, the IOC meeting was established to foster dialogue between French and German participants to build a more unified Europe. The yearly IOC meeting has expanded to attract young scholars and peacebuilding practitioners from around the world to several weeks of meetings, one of which is a week-long course Hooker taught based on his The Little Book of Transformative Community Conferencing (SkyHorse/Good Books 2016).

“My group worked on methodologies for identifying cultural narratives and the way we perform them to produce victims of violence and marginalization. Learning from the brilliant work young scholars are doing in such disparate locales as India, Brazil, and Colombia, allows me to envision new and refined approaches to the work in South Sudan, South Bend, Cape Town and in other parts of the world.”

Hooker’s final stop was Oakland, California, where he presented at the bi-annual National Association for Community and Restorative Justice (NACRJ) conference. At NACRJ, he addressed the waning power of our current language to inspire and guide people when they talk about ‘peace’ and ‘justice.’ To counter that limiting trajectory, he is exploring with others how to create and embrace a new language or narrative for enacting change.

Describing the overall approach to his work, Hooker said: “People live their lives inside of stories; which are themselves determined by broader narratives. Those narratives have a way of shaping us over a longer term. Changing any system without changing the narrative that gives sense to the system results in new systems supporting the old story; changing the story but not the system produces the old story. We have to change the narratives and examine the structures that are used to reinforce them as well as ask how we can shift resources, relationships and structures in ways that will allow us to live in new and preferred narratives.”

“The Kroc Institute is one of the central locations for teaching strategic peacebuilding,” Hooker said. “Our practice is about connecting peace work at every level of organization: individual, relational, familial, communal, regional, national, and international. It’s also about connecting, over time, the education, food, safety, and justice systems which we construct and inhabit.