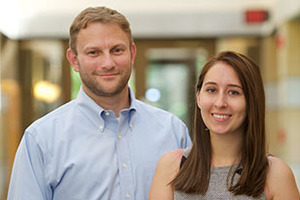 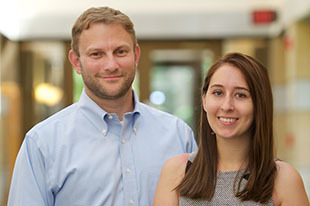 Doctoral students Angela Chesler and Steven Savides have been named the first recipients of the Darby Fellowship.

Angela Chesler is a Ph.D. student in Peace Studies and Political Science with a specialization in International Relations. She holds a B.S. in both Economics and International Affairs from Georgia Tech as well as an M.A. in International Peace and Conflict Resolution from American University.

Prior to coming to Notre Dame, Angela conducted research for the United States Institute of Peace on topics including conflict prevention and termination, CVE and post-conflict peacebuilding. Her research contributed to USIP publications as well as field trainings and educational seminars for diplomats and peace practitioners. She also worked substantially in issue areas of human rights, immigration and refugees through organizations such as Amnesty International and Refugee Resettlement and Immigration Services.

Angela’s research interests include civil war, conflict termination, peace agreements and the costs of war. She is especially interested in  the role of unilateral ceasefires in peace processes. Angela is also engaged in a long-term project to predict and evaluate the effects of conflict on local and regional development by tracking and quantifying the costs of civil war. She hopes that a systematic assessment of these costs will help produce a model of conflict impact that can inform strategies of conflict prevention, mitigation and termination.

Steven T. Savides is a Ph.D. student in Theology and Peace Studies. He holds an M.T.S from Harvard Divinity School, an M.Div from Andover Newton Theological School, and a B.A. from Principia College. His recent work as an ordained minister in the United Church of Christ with congregations emerging from conflict and his earlier work as a journalist covering his native South Africa’s post-apartheid transition to democracy inform his ongoing research into conflict transformation and peacebuilding.

Steven's research interests lie at the intersection of ethno-religious conflict in postcolonial and decolonizing contexts; identity politics; emerging theological expressions from the global South; and the capacity of ritual and symbol to help bridge seemingly intractable conflict by transforming trauma, shame, and guilt through processes of forgiveness, reconciliation, and healing. He is particularly interested in investigating decoloniality in the southern African theological context and its implications for interreligious dialogue and cooperation.

A fund established by the Kroc Institute’s Advisory Council in 2010 to support fellowships for doctoral students in peace studies has been named in memory of John Darby, professor of comparative ethnic studies at Notre Dame from 1999 until his death in June 2012. The award is given annually to students who exemplify his commitment to rigorous, normatively informed scholarship on peacebuilding and conflict resolution.

From 2002-06, Professor Darby directed a major Kroc Institute research initiative on ethnic conflict that resulted in a substantial body of scholarly and practical work. In 2004, he founded and directed the Peace Accords Matrix (PAM) a unique database and tool for research and peacebuilding, which remains central to Professor Darby’s legacy at the Kroc Institute and worldwide.