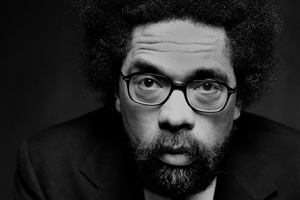 Cornel West, professor of the practice of public philosophy at Harvard University and a prominent public intellectual, will deliver the 25th annual Hesburgh Lecture in Ethics and Public Policy at 4 p.m. April 12 (Friday) in O’Laughlin Auditorium in Saint Mary’s College’s Moreau Center for the Arts.

The Hesburgh Lecture is a signature event of the University of Notre Dame’s Kroc Institute for International Peace Studies.

Currently at Harvard, West has also taught at Union Theological Seminary in New York, Yale University in New Haven, Connecticut, and the University of Paris. He is the author of 20 books and the editor of 13 more. Some of his most prominent titles include the books “Race Matters” and “Democracy Matters.” His latest book, “Black Prophetic Fire,” explores 19th- and 20th-century African American leaders and their legacies.

“We are delighted to welcome Dr. West to campus,” said Asher Kaufman, John M. Regan Jr., Director of the Kroc Institute. “Expanding our focus on peacebuilding in the United States is a key commitment within the Kroc Institute’s new strategic plan, and we are honored to host a public intellectual of Dr. West’s caliber who brings vital expertise on race, and justice. In American politics and society. His lecture is sure to be a dynamic event.”

The lecture is open to the public, but is currently sold out.

The Hesburgh Lecture is named in honor of the Kroc Institute’s founder, Rev. Theodore M. Hesburgh, C.S.C., late president emeritus of Notre Dame. The lecture series began in 1995. Each year, a distinguished scholar, policymaker and/or peace advocate is invited to deliver a major lecture on an issue related to ethics and public policy in the context of peace and justice.

The Kroc Institute is an integral part of Notre Dame’s Keough School of Global Affairs. The Institute is one of the world’s principal centers for the study of the causes of violent conflict and strategies for sustainable peace.