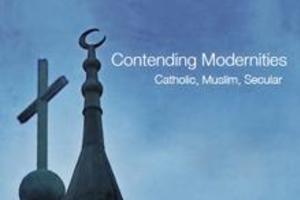 Scholars of Catholicism, Islam, and secularism gathered last week (July 8-9) at the University of Notre Dame’s London Centre just off Trafalgar Square to discuss two research clusters envisioned for the interdisciplinary research project Contending Modernities: Catholic, Muslim, Secular. The two working groups are “Science and the Human Person,” sponsored by the Luce Foundation, and “Global Migration and the New Cosmopolitanism.”

Contending Modernities is a major interdisciplinary effort to generate new knowledge and greater understanding of the ways in which religious and secular forces interact in the modern world. The London meeting, attended by about 30 senior scholars, was the first major academic gathering for the project since its public launch in New York in November 2010.

R. Scott Appleby, principal investigator of Contending Modernities and director of Notre Dame’s Kroc Institute for International Peace Studies, said the research groups will bring Catholic, Muslim, and secular approaches and perspectives to bear on the pressing social and ethical issues raised by the life science and environmental studies and the impact of global migration on religious and secular communities.

The “Science and the Human Person” working group focuses on responses to the ethical dilemmas posed by scientific research, applied technologies, and public policies. Among the scholars who represented this group in London are Ebrahim Moosa, Professor of Religion and Islamic Studies at Duke University, and M. Cathleen Kaveny, Professor of Law and Professor of Theology at the University of Notre Dame.

The “Global Migration and the New Cosmopolitanism” working group focuses on the causes, consequences, and implications of mass migration, social mobility, and demographic change. Among the scholars who represented this group in London are Vincent Rougeau, Dean of the Boston College Law School, and Mona Siddiqui, Professor of Islamic Studies and Public Understanding at the University of Glasgow.

Based at the University of Notre Dame’s Kroc Institute for International Peace Studies, Contending Modernities involves dozens of scholars, public intellectuals, and religious and secular leaders from universities and research institutes around the world. In addition to the two clusters discussed at the meeting, about five other groups will focus on issues such as gender, state and society; human development and the globalizing economy; authority, community and identity; governance and citizenship, rights and obligations; and deadly violence and conflict transformation.