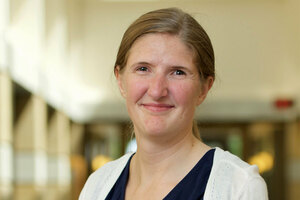 Carli Steelman is a fourth-year peace studies and sociology Ph.D. student. Originally from Little Rock, Arkansas, Carli studied political science before coming to the University of Notre Dame. She credits the Kroc Institute for enabling her research which focuses on the role of collective memory in post-conflict societies Bosnia and Herzegovina and Northern Ireland.

What attracted you to studying peace at the Kroc Institute?

Here I was able to find the resources and support for the international research that I wanted to do. I am working with a very unconventional topic as I'm looking at collective memory of violence, and I'm approaching it in an empirical way. Earlier I got some pushback from traditional disciplinary departments about whether or not that research was a good fit. I applied to the Kroc Institute as a political scientist, and the board came back to me and suggested that my research was a better fit at the intersection of peace studies and sociology.

Can you elaborate on your research?

I have conducted research trips to both Bosnia and Herzegovina and Northern Ireland and I acquired language competency in Bosnian and Serbo-Croatian. My first field trips were about understanding culture and the way violence is currently experienced and understood in each setting. I did extensive interviews and had interactions with some of the victims of the violence. I also took a series of securities courses to understand how the political situation had resolved after the war and how political party structure influenced current politics.

I use Geographic Information System Mapping (GIS) to map the spatial distribution of memory and the extent to which that correlates in space with violence. The empirical question is to what extent does the material instantiation of memory map on to actual dynamics of violence, and to what extent is this just the continuation of conflict by other means? I use publicly available open source data to compile lists of genocide monuments in Bosnia and Northern Ireland. My current fieldwork is about confirming onsite that open sources of information are accurate and assessing to what extent there is spatial error in this data.

What impact do you hope your research has once it is finalized?

A very fortunate thing about my dissertation is that its logic and structure can be replicated anywhere. I also have projects on Confederate memorialization in the U.S. South where there are Confederate monuments. The question here is, where and under what conditions have protesters been able to successfully remove them [the monuments]? The logic of the dissertation would also apply in places like South Africa, so the structure can move to explain the memory of violence in multiple different contexts.

What is your experience at the Kroc Institute so far?

It's been amazing. I cannot emphasize enough how difficult it is to do international research, so with funding, support, and mentorship, I've been able to do all of the work that I wanted to do. My plan has always been to assemble a dataset at the distribution stage that I could publish off of until tenure. I could never have realized that plan or have a chance of carrying it out without the mentorship and resources the Kroc Institute has given me.

Where would you place yourself on the strategic peacebuilding wheel?

I think it is very difficult to place yourself in one place. Part of the reason that I'm interested in memory is that it speaks to both past and current harm. When we embed memory in material spaces and memorialization, we are inflicting both cultural and structural violence.

What’s one fun fact about yourself?

I can solve a Rubik's Cube in under a minute.