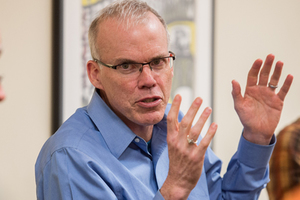 Bill McKibben, a prominent author, professor and environmentalist, will deliver the 22nd annual Hesburgh Lecture in Ethics & Public Policy on April 12 (Tuesday) at 4 p.m. in the McKenna Hall Auditorium at the University of Notre Dame. The Hesburgh Lecture is free and open to the public.

In the wake of the Paris climate accords, the papal encyclical on the climate, and the hottest year ever measured on the planet, McKibben’s lecture, “The Last Ditch Effort for a Working Climate: Report from the Front Lines” will address the current state of the climate, bringing together science and politics and offering effective strategies and tactics to counter global warming.

“Bill McKibben is at the forefront of environmental thinking and activism,” said Ruth Abbey, interim director of the Kroc Institute. “We all will benefit immensely from hearing and learning from him on this vitally important topic.”

McKibben is an author and environmentalist who in 2014 was awarded the Right Livelihood Prize, sometimes called the ‘alternative Nobel.’ His 1989 book The End of Nature is regarded as the first book for a general audience about climate change, and has appeared in 24 languages; he has gone on to write a dozen more books.

McKibben is a founder of 350.org, the first planet-wide, grassroots climate change movement, which has organized twenty thousand rallies around the world in every country save North Korea, spearheaded the resistance to the Keystone Pipeline, and launched the fast-growing fossil fuel divestment movement.

The Schumann Distinguished Scholar in Environmental Studies at Middlebury College and a fellow of the American Academy of Arts and Sciences, McKibben was the 2013 winner of the Gandhi Prize and the Thomas Merton Prize, and holds honorary degrees from 18 colleges and universities. Foreign Policy named him to their inaugural list of the world’s 100 most important global thinkers, and the Boston Globe said he is “probably America’s most important environmentalist.”

A former staff writer for the New Yorker, he writes frequently for a wide variety of publications around the world, including the New York Review of Books, National Geographic, and Rolling Stone.

The Kroc Institute for International Peace Studies, which is now an integral part of Notre Dame’s new Keough School of Global Affairs, established the Hesburgh lectures in 1995 in honor of the Rev. Theodore M. Hesburgh, C.S.C., the late president emeritus of Notre Dame, a global champion of peace and justice, and the founder of the Kroc Institute. Each year a distinguished scholar, policymaker, and/or peace advocate is invited by the Kroc Institute director to deliver a major lecture on an issue related to ethics and public policy in the context of peace and justice.

Ebrahim Rasool (2014), South Africa's Ambassador to the United States, “Relic of the Past or Template for the Future: Nelson Mandela’s Impact on Peacemaking and Statecraft in the 21st Century”

Jessica Tuchman Mathews (2013), President, Carnegie Endowment for International Peace, “Can America Still Answer to History? What's Gone Missing & How to Get It Back”

Amartya Sen (2012), 1998 winner of the Nobel Prize in Economics; Lamont University Professor and Professor of Economics and Philosophy at Harvard University, "The Demands of Justice"

Francis Deng (2011), Special Advisor to the UN Secretary-General on the Prevention of Genocide and Mass Atrocities,“The Paradox of National Protection in Divided Nations”

Rev. Bryan Hehir (2008), Parker Gilbert Montgomery Professor of the Practice of Religion and Public Life at Harvard University’s Kennedy School of Government, “Beyond the ‘Challenge of Peace’: Pastoral Letter for Our Day” and "The Hardest Case: The Politics and Ethics of Proliferation”

Shashi Tharoor (2007), author and former Under-Secretary-General, United Nations, “Globalization, Terrorism and the Human Imagination” and “The Future of the United Nations”

Congressman Lee Hamilton (2005), former vice-chair of the National Commission on Terrorist Attacks and former chairman/ranking member of the House Committee on Foreign Affairs, “Fighting Terrorism” and “How to Use American Power”

Kenneth Roth (2004), executive director, Human Rights Watch, “The War in Iraq: Justified as Humanitarian Intervention?” and “Counter Terrorism: Are Human Rights an Obstacle or Part of the Solution?”

Freeman Dyson (2002), Professor Emeritus, Institute for Advanced Study, Princeton University, “Eight Tales for Technophiles: Successes and Failures in Using Technology to Help the Poor” and “The World Economic Forum Debates: The Future of Science and Technology”

Anthony Lake (2001), Distinguished Professor in the Practice of Diplomacy, Georgetown University, and former Assistant to the President for National Security Affairs, “Balances of Power, Imbalances of Weakness: Globalization and U. S. Foreign Policy” and “Peacekeeping: Defining Success”

Saskia Sassen (2000), Professor of Sociology and the Committee on Global Thought, Columbia University, “States and the New Geography of Power: De-Nationalized State Aendas and Privatized Norm-Making”

Michael Ignatieff (1998), Member of Canadian Parliament and former director of the Carr Centre for Human Rights and Policy, Harvard University, “Barbarism and Civilization in the Age of Human Rights” and “Genocide and Human Identity”