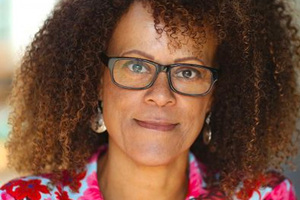 Bernardine Evaristo, Booker Prize-winning novelist, essayist, literary critic and advocate and activist for inclusion in the arts, will deliver the 2022 Hesburgh Lecture in Ethics and Public Policy. The event will take place virtually on Monday, February 7, at 4 p.m. Eastern (U.S.).

The Hesburgh Lecture is a signature event of the University of Notre Dame’s Kroc Institute for International Peace Studies.

Evaristo is the author of ten books and numerous writings that span the genres of fiction, verse fiction, short fiction, non-fiction, poetry, essays, literary criticism, journalism, and radio and theatre drama. Her writing and projects are based around her interest in the African diaspora.

Her novel Girl, Woman, Other won the 2019 Booker Prize, making her the first Black woman and Black British person to win it in its 50 year history. The novel also won many other prizes including the British Book Award’s Fiction Book of the Year and Author of the Year, as well as the Indie Book Award for Fiction.

“Bernardine Evaristo’s oeuvre as a writer and activist is highly relevant to the mission of the Kroc Institute and we look forward to her talk,” said Asher Kaufman, John M. Regan, Jr. director of the Kroc Institute. “The invitation for her to deliver the 2022 Hesburgh Lecture is directly related to the Institute's focus on intersectionality and justice as well as to our commitment to highlighting literature and, more broadly, the humanities in our work.”

The lecture is titled “The Activist Artist,” and in it Evaristo will explore her life as a writer, theater-maker, and activist within the context of British history, society and culture. There will also be a chance for audience members to pose questions directly to Evaristo.

The Hesburgh Lecture is named in honor of the Kroc Institute’s founder, Rev. Theodore M. Hesburgh, C.S.C., late president emeritus of Notre Dame. The lecture series began in 1995. Each year, a distinguished scholar, policymaker and/or peace advocate is invited to deliver a major lecture on an issue related to ethics and public policy in the context of peace and justice.

The Kroc Institute is an integral part of Notre Dame’s Keough School of Global Affairs. The Institute is one of the world’s principal centers for the study of the causes of violent conflict and strategies for sustainable peace.