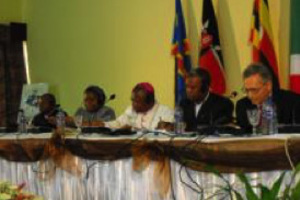 At a conference in Bujumbura, Burundi, on October 19-21, delegates from the bishops’ conferences in the Great Lakes Region of Africa approved a draft strategic plan for the Church’s regional work for peace and reconciliation.

The conference included some 125 representatives from Burundi, the Democratic Republic of the Congo, Rwanda, Uganda, Kenya, and Tanzania. Speakers included Kroc Institute faculty members Daniel Philpott, who presented a paper on a political ethic of reconciliation, and Gerard F. Powers, who presented a paper on coordinating the Church’s peacebuilding efforts. Pierre Nkurunziza, president of Burundi, also spoke at the conference.

The conference was a response to the call of the Second Synod of Bishops for Africa for more effective collegiality on behalf of reconciliation, justice, and peace. It also was an outgrowth of the work of the Joint Commission for Refugees of the Burundi and Tanzanian episcopal conferences; the Catholic Peacebuilding Network conference that was held in Burundi in 2006; and a peacebuilding initiative of the U.S. Conference of Catholic Bishops, Catholic Relief Services, and the Conference of Catholic Bishops of Burundi.

A working group convened by the Catholic Peacebuilding Network and regional peacebuilding specialists from Catholic Relief Services worked closely with the Conference Steering Committee over the past three years.

The text, in French and English, of the official Declaration from the Conference is available at cpn.nd.edu.