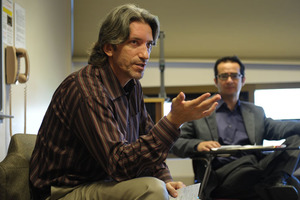 All of us can help end the genocide in Sudan’s Darfur region if we take time to voice our opposition through a few simple acts, said human rights activist and bestselling author John Prendergast, speaking to a standing-room only crowd in Notre Dame's Hesburgh Center on September 18.

“You can raise your voice and fight genocide even from your living room,” Prendergast said. “When voters like us begin to raise voices in unison, attention will be paid.”

Darfur is a region in western Sudan where 300,000 people have been killed by genocide, according to the United Nations. After a 2003 uprising of rebels in the region, the Sudanese government responded by arming the “Janjaweed” — militias charged with eliminating groups who supported the uprising. As a result, Prendergast said, more than 1,500 villages have been burned to the ground, displacing about three million people.

During one of his visits to Darfur, Prendergast encountered a young woman and her two children. The woman told Prendergast the militias had burned her village and killed two of her children in front of her. She then gave Prendergast a call to action:

“Now that you know, you must do something,” she said to him.

“Now that you know, you must do something,” Prendergast repeated. He offered a “menu of life-saving activism” for fighting genocide.

Prendergast urged people to join the anti-genocide movement by supporting organizations such as the Save Darfur Coalition and to contact their senators, congressional representatives, and even the White House to demand that governments make fighting genocide a priority.

“Our political system is a supply and demand operation like our economy,” Prendergast said. “If we demand it, they will supply it.”

Asking local media to devote more attention to genocide and encouraging corporations to sell stocks of companies that do business in Sudan are also effective tactics, Prendergast said.

“If we make enough noise, we can help end the first twenty-first century genocide,” he said. “We have to make much more noise than we’re making right now.”

During his visit, Prendergast also met with a class of Kroc master’s students. He later fielded questions following a screening of the documentary film “Darfur Now,” which offers a window into the lives of activists — including Prendergast — working to end the genocide in the region.

Prendergast is co-chair of the ENOUGH Project,an initiative to end genocide and crimes against humanity. He has authored eight books on Africa, including Not on Our Watch, a New York Times bestseller he co-authored with actor and activist Don Cheadle, star of Hotel Rwanda. Prendergast also was director of African affairs at the National Security Council and special advisor at the Department of State during the Clinton administration.

Prendergast’s visit was sponsored by Notre Dame’s Kroc Institute, the Center for Social Concerns, and the DeBartolo Center for the Performing Arts.