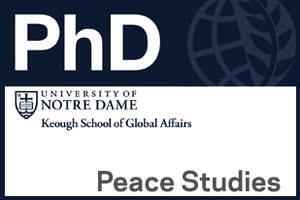 This is the story of the whirlwind first 5 years of the Kroc Institute's Ph.D. Program.

In December 2007, Laura Taylor was wrestling with her options for the future. She knew she wanted to pursue a Ph.D. in psychology, but she didn’t want to abandon her work in the field as a peace practitioner. Should I choose a path to become more employable [in a traditional discipline such as psychology], she recalled thinking, or stick with the interdisciplinary field in which I’m working [i.e., peace studies] and that I love?

Then, just before Christmas, she learned that she didn’t have to make the hard choice. The Kroc Institute at Notre Dame had announced it was launching a new Ph.D. program that merged doctoral work in several disciplines (including psychology), as well as history, political science, and sociology) with interdisciplinary peace research. Laura, who was living in California at the time, spent the next few weeks applying to meet the Feb. 1 deadline at Notre Dame. (Note: The application deadline for the Ph.D. program is now December 15.) 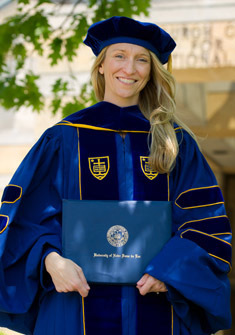 “It was as if I had this wild idea for doing both, and suddenly there it was,” she said. “There was no need to choose. I could become a scholar-practitioner, conducting research and fieldwork and teaching at the same time. And the fact that it was offered at such a respected institution made no other searching necessary.”

As a Ph.D. student at Notre Dame, Laura was named a University Presidential Fellow and a Mullen Family Fellow; won numerous grants and awards (including the Graduate School’s Shaheen Award, awarded to one outstanding student in the social sciences each year); conducted fieldwork and quantitative research with professors Mark Cummings and John Paul Lederach and other faculty in Northern Ireland, Croatia, and Colombia; published articles in leading journals; and taught undergraduate classes. Her dissertation examined the impact of political violence on children, families, and communities in Northern Ireland.

Shortly before becoming the first graduate of the Kroc Institute’s Ph.D. in Peace Studies program, Laura was hired as a tenure-track faculty member at the University of North Carolina, Greensboro. Her new colleagues in the peace studies department at UNC-Greensboro describe her as “hands-down, among the very best.”

“The depth of Laura’s knowledge in psychology and peace studies will contribute significantly to our program,” said professor Tom Matyok of the University of North Carolina, Greensboro. “Her international experience is crucial as we extend our global presence. Of course, the Kroc Institute and the University of Notre Dame are the gold standard among peace studies programs. We are excited that Laura chose to join our department. Her scholarship and practice fit perfectly with our focus on engaged scholarship.”

A backlog of interest

Just weeks before Laura applied to the program in January 2008, Notre Dame’s Academic Council had approved the Kroc Institute’s proposal for a joint Ph.D. program with the Departments of History, Political Science, Psychology, and Sociology. Robert C. Johansen, the first director of doctoral studies at the Kroc Institute, wasn’t sure there would be enough time for students to apply by February 1.

“Most serious Ph.D. students put together their applications in December, and we hadn’t even announced yet,” he said. “But we felt we were ready, and we wanted to get started.” The communications staff scrambled to get application materials up on the Kroc website, and despite short notice, the holidays, and almost no publicity, 63 prospective students submitted applications by the deadline.

The program’s immediate popularity — and the high quality of the applicants — did not surprise Johansen, who had been the program’s primary architect. “I was confident we would have many good applicants, because a couple dozen students had been corresponding with me for years, asking when we were going to get started,” he said. “We had a backlog of people who wanted to do serious work — but not just in a single discipline. They wanted to cover peace and justice issues in a global context.”

Five years later, the Ph.D. program now receives up to 150 applications each year. Of the 29 total students who have enrolled since 2008, more than half have been awarded University fellowships (Presidential, Gaia, Notebaert), a high honor. In 2010, the Department of Theology also became a partner in the joint program, and the Department of Anthropology joined the peace studies program in 2013.

Stepping up our game

In April 2013, eight students — twice as many as in previous years — were admitted to the Ph.D. Program in Peace Studies, and five were awarded University fellowships. Two of the first students to enroll in the program now have graduated. Alex Dukalskis, political science and peace studies, was the second; he has accepted a post-doctoral position at Columbia University and is teaching at the University of North Carolina, Chapel Hill.

“Nothing we have done in the history of the Kroc Institute is more important than establishing the Ph.D. in Peace Studies,” said Scott Appleby. “In a Ph.D. program, the faculty-student relationship is colleague-and-junior-colleague. This requires our faculty to step up their game and creates a research multiplier effect, allowing us to tackle complicated questions and employ methods we could never do on our own.”

The interdisciplinary nature of the program also stretches faculty, Appleby said, requiring them to master academic literature in more than one discipline as well as in peace studies. “One of the delights and challenges of having students in multiple disciplines is you have to keep up with them!” said Appleby. “Your teaching skills get tested, your research gets tested, and all of that makes us better teachers and scholars.”

Another benefit of the Ph.D. program, Appleby said, is the way it has strengthened the Kroc Institute’s relationship with all of the partner departments, attracting outstanding students and threading peace studies through other disciplines. “We’ve been thrilled with the quality of our Ph.D. students in peace studies,” said John McGreevy, Dean of the College of Arts and Letters. “I have no doubt that they are enriching the education of all of our graduate students at Notre Dame.”

The future of higher education 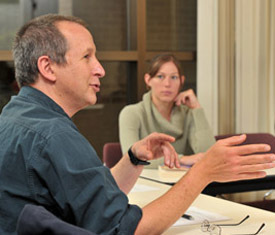 In 2011, Asher Kaufman, associate professor of history and peace studies, was appointed Director of Doctoral Studies at the Kroc Institute. When asked to take on the position, he didn’t hesitate. “In academia you don’t often have the chance to be part of creating something new,” he said. “To me, this interdisciplinary program was very exciting.”

The future of American higher education is in joint programs, Kaufman said. “It is more and more acknowledged that research and scholars need to be in conversation with more than one discipline,” he said. “Peace studies offers this potential because it is not a discipline, it is a field of study that requires good use of available disciplines. This is exactly the environment available at Notre Dame.”

Students in the Ph.D. program are publishing not only in their own disciplines, but across disciplines, Johansen said, citing the article that Laura (psychology) and Alex (political science) co-wrote and published in the Journal of Peace Research on truth commissions and post-conflict democratization (September 2012). “Neither of them could have written this article by themselves,” said Johansen. “This is the kind of unique synergy we expect to see more and more of, and that the world needs.”

Students in the Ph.D. program work even harder than most, Kaufman said, taking more classes, meeting the high research standards for both their disciplines and peace research, and passing two comprehensive exams — one in their own discipline and one in peace research. All of this gives students an edge in an extremely tight doctoral market.

In response to the Ph.D. crisis, “We’re selecting students who fit a new kind of profile,” said Appleby. “We’re asking more of them, to become experts not only in their areas but also in others so they will be leaders of social transformation. We are preparing bona fide historians — and political scientists, sociologists, psychologists, theologians — who come equipped with added value.”

“Any college or university that advertises at the assistant professor level will insist on first-rate credentialing in the core discipline,” Johansen said. “But if a candidate can demonstrate expertise above and beyond his or her core discipline, that puts the application on the top of the pile.” In addition, he said, graduates of the program can search for jobs in two academic markets rather than just one, and the second area, peace studies, is one of the few growing academic fields in the country.

“I know my joint degree gave me a real advantage,” said Laura Taylor. “For one thing, my CV is simply longer because I work in both psychology and peace studies and because I received so much support from the university for research, conferences, and graduate professionalization.” In addition, “both of my job offers were in peace studies, which clearly wouldn’t have happened if I only had psychology training.” Finally, “Notre Dame is such a recognizable name and valuable degree.”

Embedding peace studies in the academy

While Laura and others plan to continue integrating traditional academic work with “engaged” fieldwork, some graduates of the program will make other choices, said Kaufman. “Many of our students will be happy doing purely academic work, scholarship that makes a difference, teaching new generations and embedding peace studies more thoroughly into the academy. Others won’t pursue academic careers, but will become leaders in government, foreign ministries, and international policy and research centers. These are both in keeping with the Kroc Institute’s mission.”

“We live in a period of globalization where problems and solutions are not confined to a single discipline, plus a time in history where we can’t focus only on highly local issues; they must be transnational,” said Johansen. “I am extremely proud of having a program that is exemplary and that represents the wave of the future.”

This article originally appeared in the Kroc Institute’s 2012-13 Annual Report.