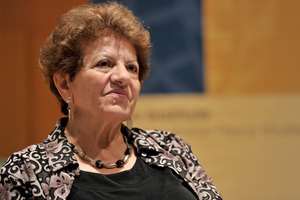 Jean Zaru, who was born into a Quaker family in Ramallah, Palestine, was eight years old when she witnessed the Nakba (“the catastrophe”) that made 750,000 Palestinians permanent refugees during the creation of the State of Israel. Since then, she has become a leading force of nonviolent resistance against all forms of personal and structural domination.

Zaru, the author of Occupied with Nonviolence: A Palestinian Woman Speaks, will discuss nonviolent resistance at the 13th annual John Howard Yoder Dialogues on Nonviolence, Religion and Peace at the Notre Dame’s Kroc Institute.

Sponsored by Notre Dame’s Kroc Institute for International Peace Studies, the talk, titled “Journey of Transformation: Nonviolent Resistance to Structures of Domination,” will take place at 11 a.m. on Sept. 29 (Thursday) in the Hesburgh Center for International Studies auditorium. Zaru’s talk is free and open to the public.

Zaru has served on the Central Committee of the World Council of Churches and has been a member of the International Council of the World Conference for Religion and Peace. In 2010 she was awarded the Anna Lindh Memorial Prize, which supports those who “have the courage to fight indifference, prejudice, oppression and injustices in order to promote a good life for all people in an environment marked by respect for human rights.” Zaru also serves as clerk of the Ramallah Friends Meeting and was a founding member and vice-chair of Sabeel, an ecumenical Palestine Liberation Theology Center in Jerusalem.  Most recently, she was instrumental in establishing the Friends International Center in Ramallah.

The Yoder Dialogues are named in honor of John Howard Yoder, a professor of theology at Notre Dame from 1968 until his death in 1997. Yoder’s teaching and scholarship profoundly influenced theological discussions about war, social justice, and the relationship between church and state. He was a founding fellow of the Kroc Institute, where he initiated courses on war, law and ethics, and nonviolence. His books include The Priestly Kingdom, What Would You Do? and The Politics of Jesus.