The International Peace Studies concentration in the Master of Global Affairs builds sustainable peace and justice through careers in policy analysis and political change, government and organizational leadership, and conflict analysis and transformation. This new cohort of students join a global network of more than 500 master’s graduates addressing violent conflict and peace, human rights and human development, environmental sustainability, and related issues. Students in this concentration are considered Kroc Scholars. 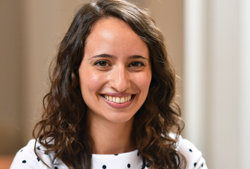 Karis Ailabouni (United States) is a second-generation Palestinian immigrant and refugee who was born and raised in the U.S. After graduating with a B.A. in music, psychology, and French from Valparaiso University, she taught English in Madagascar, co-founding an English club that equipped 200 youth with language skills for future employment. Karis then lived in Jerusalem designing, implementing, and managing a study abroad program for Notre Dame. She formed strategic partnerships with local nongovernmental organizations, educational institutions, and religious organizations and was involved in efforts such as Right to Movement and the Christian Academic Forum for Citizenship in the Arab World. Karis is the recipient of a Kroc Institute Fellowship. 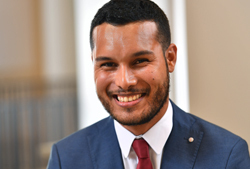 Eduardo José Badilla Valdivia (Costa Rica) has worked as a field and verification officer with the United Nations Mission in Colombia and as policy advisor on human rights and business with the Permanent Mission of Costa Rica to the United Nations. Through his career he has developed and implemented community engagement strategies with civil society groups and communities in their transition from conflict to recovery, paying close attention to gender, ethnic, and human rights perspectives. He believes in the importance of public participation and citizen engagement as an effective tool to support peace efforts and capacity-building at the grassroots level. Eduardo is the recipient of a Kroc Institute Fellowship. 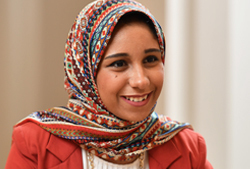 Rana El-Beheiry (Egypt) has worked as a field officer for an interreligious peacebuilding project that was implemented across five countries through Catholic Relief Services (CRS). Rana also served as monitoring and evaluation assistant for an interfaith action program that addresses sectarian violence in rural areas in Upper Egypt and worked as a volunteer in a CRS program that provides Syrian and African refugees access to schools. She also interned with UNHCR, the UN Refugee Agency. Rana developed a passion for peacebuilding integration, conflict prevention, youth empowerment, and vulnerable populations. She holds a B.A. in political science from Cairo University. Rana is the recipient of a Kroc Institute Fellowship. 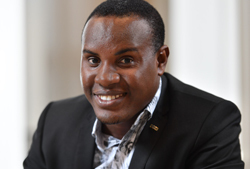 Ephraim Bassey Emah (Nigeria) has worked as an intern with Mennonite Central Committee, where he served as a peace activity researcher, documenting conflict occurrences in northern Nigeria. He worked with the Centre for Peace Advancement in Nigeria as a community engagement program officer, working with youth groups involved in substance abuse, gang violence, and identity conflict escalation in Nigeria’s Plateau State. Most recently, he worked for the United States Institute for Peace, working in Nigeria to establish platforms for collaborative problem-solving and prevention of insecurity and crime in conflict-affected communities. Ephraim is the recipient of a Kroc Institute fellowship. 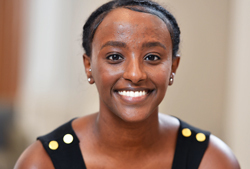 Helina Haile (United States) served as a U.S Peace Corps volunteer in Rwanda, where she taught English and led after-school youth development groups for boys and girls. She also spent time with American Refugee Committee Rwanda as a program development volunteer. Helina later worked on racial equity issues with AmeriCorps VISTA and the City of Minneapolis for the Obama Promise Zone Initiative, and served as a legal assistant for the Minnesota AIDS Project. She holds a B.A. in political science and international studies from Northern Michigan University, and speaks Amharic and is conversant in Kinyarwanda. Helina is the recipient of a Thomas D. McCloskey Peace Fellowship. 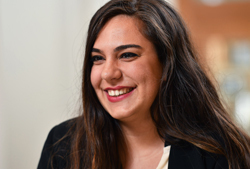 Gizem Korun (Turkey) majored in international studies and graduated with honors from Sabanci University in Istanbul. She has worked on several youth mobility activities. Most recently, she worked as a project manager at International Blue Crescent, a Turkey-based nongovernmental organization. Gizem was involved with several projects related to healthcare access, educational services, social entrepreneurship, and capacity-building, working closely with refugees and international organizations. She is the recipient of a Nanovic Institute Fellowship. 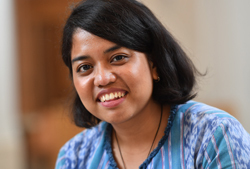 Novita Liangga Kumala (Indonesia)is a licensed Indonesian advocate and environmental activist. Throughout her career, she has worked in a variety of sectors including banking and finance, corporate law, social enterprise, and environmental policy. Her current research interests focus on conflict resolution for land, natural resources, and environmental conflicts. She has worked for World Resources Institute Indonesia, Indonesia’s national agency on Reducing Emissions from Deforestation and Degradation (REDD+), and a corporate law firm in Jakarta. She also volunteers with the Social Corporate Lawyer Society, a network for corporate law professionals who provide pro bono services. Novita is the recipient of a Thomas D. McCloskey Peace Fellowship. 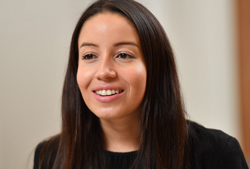 Maria Isabel Leon Gomez Sonet (Honduras) holds a B.A. in global studies with an international development concentration. She has worked with the Chicago Religious Leadership Network on Latin America on issues regarding U.S. foreign policy to Latin America, human and immigration rights, and social justice. Marisa has also interned at the Auschwitz Institute for Peace and Reconciliation on genocide and mass atrocity prevention. Most recently, she interned at at the Trust for the Americas, an organization affiliated with the Organization of America States in Washington, D.C., on economic and social inclusion in Latin America and the Caribbean. Maria is the recipient of a Kroc Institute Fellowship. 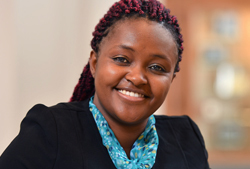 Mary Mumbi (Kenya) served as the national director and coordinator of Global Unites in Kenya. She collaborated in the development and establishment of youth peacebuilding and conflict transformation initiatives in the Democratic Republic of Congo, Uganda, and Liberia. Mary enjoys teaching and mentoring young people in civic participation and character leadership. She is interested in issues related to youth, education, and migration in the global south. She holds a bachelor of science in biochemistry and a diploma in project management. Mary is the recipient of a Kroc Institute Fellowship. 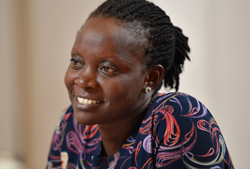 Victoria Nyanjura (Uganda) recently worked as an aftercare specialist at International Justice Mission in Gulu, Uganda, an organization that transforms justice systems and protects widows from property-grabbing in Northern Uganda. She is a former project assistant for the Gender Justice Department at the Justice and Reconciliation Project, a Ugandan organization that works with war-affected communities, and is a member of the Women’s Advocacy Network. She also played a significant role in organizing a petition for redress that resulted in the parliament of Uganda unanimously passing a resolution to remedy the plight of victims of Northern Uganda’s conflicts. She is the recipient of a Thomas D. McCloskey Peace Fellowship. 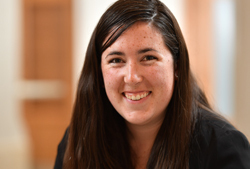 Jacqueline Shrader (United States) most recently served as program director to a youth leadership development program serving emerging leaders from Latin America and the Caribbean. Previously, she worked in rural Peru on a team of social workers with the Jesuit Volunteer Corps, implementing and supporting youth programs. Jacqueline has conducted research in Guatemala on how female civil society and grassroots leaders are confronting gender-based violence. Jacqueline is fluent in Spanish, and holds a bachelor of arts in theology and religious studies from Seattle University. She is the recipient of a Kroc Institute Fellowship. 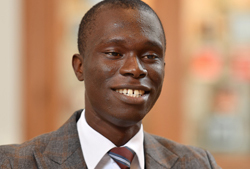 Nzubechi Pantaleon Uwaleme (Nigeria) has five years of experience in the nonprofit sector with a special focus on peacebuilding programming and youth leadership development training. He worked as a project manager on the Emerging African Leaders Project of the Centre for Social Awareness, Advocacy and Ethics, where he helped students facilitate social projects for community development. Nzubechi serves on the board of AfriPeace Sustainable Development Foundation, an organization focused on promoting peace education, and established the Students for Peace Network in 10 secondary schools in the Nigeria. He earned a bachelor's in quantity surveying from Federal University of Technology in Nigeria. Nzubechi is the recipient of a Kroc Institute Fellowship. 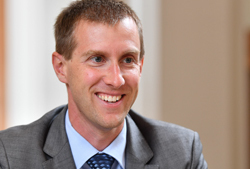 Nate Van Duzer (United States) has worked with local policymakers and elected officials for nearly a decade, first as an aide to a Seattle city councilmember and most recently with the administration and elected school board of Seattle Public Schools. These positions allowed him to interact with advocates, constituents, and the media while pursuing legislative and policy improvements in areas ranging from criminal justice reform to early childhood education to gun safety. Nate volunteered with a nonprofit organization that partners with youth to help them exit street life. He holds a B.A. in history from Georgetown University, with a minor in Arabic and a certificate in Islam and Muslim-Christian Understanding. Nate is the recipient of a Thomas D. McCloskey Peace Fellowship.