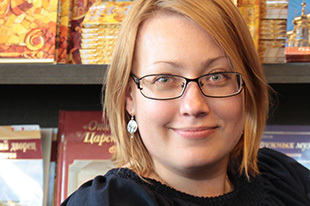 Anastasia Kushleyko is a regional legal adviser for the International Committee of the Red Cross (ICRC), where she leads efforts to integrate and promote international humanitarian law in 11 countries across Eastern Europe and Central Asia.

Anastasia, who was named to her post in November 2013, is no stranger to the ICRC. She interned there in 2001 after graduating from Notre Dame with a master's degree in international peace studies, and held various positions there over the course of nine years.

"I now have my dream job," Anastasia says. "I passed through all the stages of legal professional development at the ICRC: intern, assistant legal adviser, legal adviser and now regional legal adviser. The ICRC also was the site of my first job, so returning has been a professional homecoming."

From 2011 to 2014, Anastasia worked as legal director for the Stichting Russian Justice Initiative (SRJI), which seeks redress for human rights violations in the North Caucasus republics of Russia such as Chechnya, where violent conflict has persisted since the second Chechen war began in 1999.

At the SRJI, Anastasia supervised several attorneys in the North Caucasus who litigate on behalf of victims or family members affected by disappearances, torture, or other human rights violations carried out by Russian government agents. The organization brings cases to the European Court of Human Rights in Strasbourg, France.

"I left the Kroc Institute with a compelling vision of what I wanted to do with my career," Anastasia said. "The experience was truly life-changing."