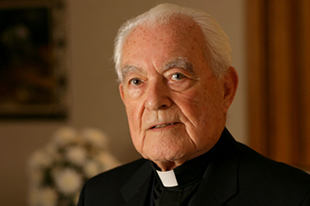 Rev. Theodore M. Hesburgh, C.S.C., President Emeritus of the University of Notre Dame, which he led for 35 years, passed away on February 26, 2015 at the age of 97. He is widely considered one of the most influential figures in higher education in the 20th century. See Notre Dame's Fr. Hesburgh tribute »

The recipient of the Congressional Gold Medal and the Medal of Freedom, Father Hesburgh has held 16 U.S. presidential appointments and been a leading force in major social issues ranging from civil rights to nuclear non-proliferation to Third World development and immigration reform. His stature as an elder statesman in American higher education is reflected in his more than 150 honorary degrees.

Father Hesburgh stepped down as head of Notre Dame in 1987, ending the longest tenure among active presidents of U.S. institutions of higher learning. His major retirement role has been developing several Notre Dame institutes and centers he was instrumental in founding, including the Kroc Institute for International Peace Studies, the Kellogg Institute for International Studies, and the Center for Civil and Human Rights.

Father Hesburgh was educated at Notre Dame and the Gregorian University in Rome and was ordained a priest of the Congregation of Holy Cross in 1943. He received his doctorate from the Catholic University of America in 1945. He joined the Notre Dame faculty that year and served as chaplain to World War II veterans on campus in addition to teaching in the Religion Department. He was appointed the head of that department in 1948, and the following year was appointed executive vice president in the administration. At the age of 35 in June 1952, he was named the 15th president of Notre Dame.