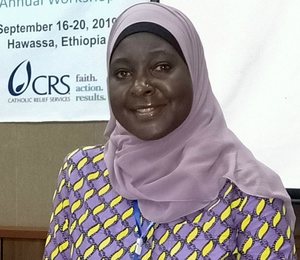 “People of different faiths usually do not have a good understanding of the religious other,” said Shamsia.

Interreligious study and work has been a theme for Shamsia.

She started doing peacebuilding work in Kenya in 2002, a time and place where few Muslim women were engaged in this work. After being involved in activities around interreligious dialogue, she wanted to go to university to earn more than the secretarial diploma she had. She became the only Muslim student at Tanzaga College, a Catholic school in Nairobi, Kenya, where she focused on peacebuilding from a faith-based perspective.

After graduating in 2006, she became a national coordinator for Citizens Assembly, organizing conversations on social and public policy issues. When the 2008 election resulted in violence in Kenya, Shamsia led a team of trainers through the United Nations Development Program initiative called Emergency Volunteer Scheme. She helped individuals from organizations learn more about volunteerism, mediation, early response and aspects of peacebuilding and conflict resolution.

Shamsia presented a paper at a forum in Kenya on interreligious perspectives on peacebuilding in Africa, and a Catholic priest and alumni of the Kroc Institute encouraged her to apply to the University of Notre Dame. She was accepted into the Kroc Institute's international peace studies master’s program, and from 2008 to 2010 studied how religions can play a role in building and influencing peace.

Upon returning to Africa, she took on several consulting projects and was offered a full-time job at the Life & Peace Institute in Kenya and Somalia. In 2013, she took on her current role with CRS working with Muslims, Christians, and indigenous traditionalists in Kenya, Uganda, Tanzania, Egypt, Nigeria, and Niger.

While not all conflicts between people of different beliefs are rooted in religious conflict, Shamsia observes that groups in conflict often haven’t found what they share in common. By exploring a shared need, she is able to help groups work toward peace and realize they are partners and co-creators.

“They have to work together,” she said. “Creating that experience of partnership and collaboration in and of itself is a process.”

With trained partners, she accompanies groups in conflict during the long, slow work of peacebuilding. In some areas, Shamsia has seen groups who have been in conflict over access to water come together to work on water wells or youth learn skills that can generate income, such as the project in Sokoto, Nigeria, where young people do neighborhood cleanup for a small fee. It’s not common for people of different faiths to be in business together, but Shamsia has been able to help start interreligious community projects to manage early childhood center.

As part of the work to include women in interreligious platforms, Shamsia has helped develop projects to help women lend and save money for business ventures. In one community in Garissa, CRS provided resources for groups to start income-generating activities.

In Niger, women purchased catering equipment to rent out. After months of working together, they started a savings and lending activity to help others and CRS provided more training on how to manage that.

“It’s about building their capacity, showing them they can be in charge of their life, and that they don’t have to fight but need to look at ways to complement and support each other,” Shamsia said. “It’s an opportunity for them.”

That leads to others wanting to be involved and to groups cooperating proactively and peacefully.

“That’s what is gratifying and encouraging,” she said. “Something that can actually help communities overcome violent conflicts.”