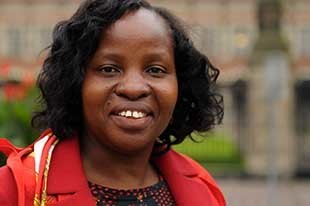 Rosette Muzigo-Morrison is a Legal Officer for the Office of the Prosecutor at the International Criminal Court, The Hague, Netherlands.

Rosette was one of the longest-serving legal officers with the United Nations International Criminal Tribunal for Rwanda, which sought to charge and prosecute persons responsible for genocide or other humanitarian violations in Rwanda and its neighboring states in 1994. Beginning in 1995, Rosette worked with the tribunal in The Hague, Tanzania and Rwanda.

From 2006-2008, she completed a special assignment with the Special Court for Sierra Leone, where she was responsible for the establishment of a Sub-Office for the Prosecution of Charles Taylor, former president of Liberia. She oversaw all legal issues relating to the special court in the Netherlands. Following the death of Slobodan Milosevic, Charles Taylor is the only head of state to be brought before an international court to face justice.

"Working with witnesses and victims is my favorite part of the work," she said. "Dealing with real people and helping them find meaning in the trials usually comes with a chance to start thinking about forgiveness and reconciliation. I also had to work with the accused person, so I once again had to appreciate the fundamental principle of presuming him innocent until the prosecutor proves otherwise."

From 2011-2012 she also served as a Sexual Violence Investigator for the United Nations Office of the High Commissioner for Human Rights Commission of Inquiry on Libya.

In 2011, she returned to Notre Dame to accept the Kroc Institute's Distinguished Alumni Award.