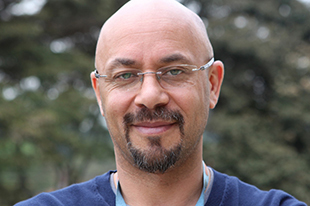 Obi Anyadike is an Open Society Fellow researching the Boko Haram insurgency in northeast Nigeria. His research project explores the recruitment and retention of Boko Haram militants in order to understand the motivations of the group. Anyadike is also examining why some young men in the same communities have resisted recruitment. This analysis helps rethink current prevention of violent extremism programs.

He also serves as editor-at-large of IRIN, the world's leading humanitarian news service.

IRIN reports from the frontlines of conflicts and natural disasters with the aim of driving a more effective response to crises. It has a unique audience profile, reaching influential decision-makers in government, the UN, and international NGOs; as well as the direct responders on the ground. IRIN promotes transparency and accountability in the complex and under-scrutinized multi-billion-dollar aid sector. Before becoming an Open Society Fellow, Anyadike also served as IRIN's Africa editor.

"We are playing a positive role in the reform of the aid industry, asking questions of an aid system whose goal should be to benefit those in need," said Anyadike.

Originally from Nigeria, Anyadike came to the Kroc Institute in 1996 to earn a master's degree after working as the Africa editor for Inter Press Service, a global news agency based in Harare, Zimbabwe. "Most of my work as a journalist has been focused on conflict," he said. "Graduate school in peace studies at the Kroc Institute gave me a chance to step back, analyze and research the underlying causes of those conflicts."

He is also a board member of the Graca Machel Women in Media Network, promoting women journalists in Africa.

Anyadike began his career with IRIN in 1997. In 2001, he created PlusNews, a global HIV/AIDS news service that provided unique human-centered multimedia reporting on the epidemic. He also served as IRIN's editor-in-chief from 2009-2014, overseeing text and multimedia production across five regional desks in Johannesburg, Dakar, Nairobi, Dubai, and Bangkok, reporting on emergencies in some 70 countries.