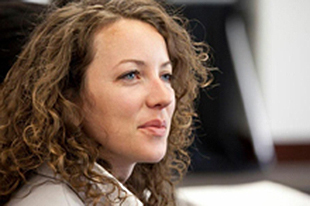 Mary Boyer is a disaster risk management specialist at the World Bank in Washington, D.C., where she helps countries in Latin America and the Caribbean region prepare for financial responsibilities resulting from natural disasters.

Before joining the World Bank in early 2015, Mary spent nearly two years in Kabul, Afghanistan, working for a USAID-led initiative to strengthen local governments, which enabled her to serve in a variety of roles. Most notably, Mary served as the coordinator of a team of 40 international election observers, a significant portion of the 200 observers who monitored the 2014 audit of Afghanistan's runoff presidential election, which was negotiated by U.S. Secretary of State John Kerry.

"It was a very big deal, not only for the future of the country, but because it was the biggest terrorist target in Afghanistan at the time," Mary said. "We had to manage the persistent threat of being attacked while trying to do our job."

Before and after her role in the election Mary worked as a grant writer and program manager on a USAID-funded initiative to foster unity among communities that were vulnerable to exploitation by insurgents. The initiative enabled local governments to implement infrastructural, cultural, and vocational training projects.

"Our immediate goal was not necessarily long-term development, but smaller projects that helping stabilize local communities and build the relationships that are essential for continued development," Mary said. Focused on Afghanistan's southern and eastern provinces, the initiative funded everything from motorcycle maintenance courses for young men to road repairs to kite-flying festivals.

"Kite-flying, which was banned by the Taliban, is a popular recreational activity that has been passed down by Afghans for generations," Mary explains. "To encourage it is almost an act of defiance."

Before moving to Kabul, Mary worked in Johannesburg, South Africa, as a policy officer for African Risk Capacity, an insurance program led by the African Union that provides financial relief to African countries following drought.

"When you do this kind of work you never live in one place for too long," Mary said. "But my peace studies courses prepared me to live this kind of life not only as a skilled professional in the international community, but as someone with a vocation."

Since graduating from Notre Dame in 2007 with degrees in anthropology and peace studies, Mary also has conducted research on development for the Bologna Institute for Policy Research in Bologna, Italy, worked as a development coordinator for National Public Radio, and earned a master's degree in economics and international relations conflict management from Johns Hopkins University's School of Advanced International Studies.