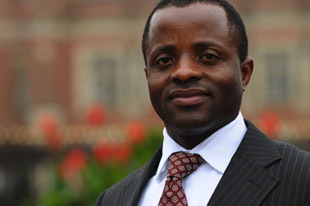 Martin Ewi is Technical Coordinator of the ENACT (Enhancing Africa's Response to Transnational Organized Crime) Project at the Institute for Security Studies (ISS) in Pretoria, South Africa. Previously he served as a senior researcher at the ISS on terrorism, counter-terrorism, radicalization, and violent extremism in Africa.

Prior to joining the ISS in 2010, Martin also served as Political Affairs Officer at the Organisation for the Prohibition of Chemical Weapons in The Hague and as the officer in charge of the African Union strategic security unit and counter-terrorism analysis.

On September 11, 2001, Martin was in New York on a Kroc Institute internship with the African Union. He missed his 8 a.m. train and was worried about being late for a meeting at the United Nations. As the 9 a.m. train left the station, smoke was rising from the World Trade Center.

The 9/11 attacks led to a professional decision for Martin. After 16 months in New York, he returned to Africa, where he worked as an anti-terrorism analyst in the African Union's Peace and Security Directorate in Addis Ababa, Ethiopia.

The Kroc Institute master's program uniquely prepared him for his career, he said. Courses in humanitarian law, theories of international relations, human rights, and conflict resolution addressed the often-neglected human dimensions of security.

"By having people with my kind of training in the African Union, we were able to emphasize unconventional methods for combating terrorism, such as the need to address social factors that lead to terrorism," he said. "Our goal was to go beyond the traditional security and military approach to understand the issue and address the root causes of conflict."