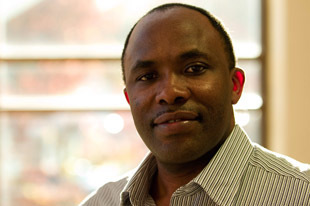 In the wake of Kenya's disputed December 2007 presidential election, George Wachira saw his home country explode into unprecedented violence that led to the deaths of more than 1,000 people.

With four other peacemakers, Wachira founded the group Concerned Citizens for Peace only a day after the onset of the crisis. Working with the media and visiting dignitaries, the group became a prominent forum for dialogue and a prominent voice for tolerance and nonviolence. The group later worked closely with the international mediation by former UN Secretary General Kofi Annan.

Wachira now is a Ph.D. candidate in peace studies at the University of Bradford in the United Kingdom. His research focuses on the use of truth and reconciliation commissions in Africa.

"In Africa, a central question is how countries move forward after atrocious conflict," Wachira said. "It's a struggle I have faced, and it's a question I'm still trying to answer."

In the fall of 2009, Wachira's research interests led him back to the Kroc Institute, where he returned as a visiting fellow. As a fellow, he researched and wrote Making Peace in the Post-Election Crisis in Kenya, 2008, which he authored with fellow Kroc alum Thomas Arendshorst (M.A '06). Download pdf åÈ (92 pages).