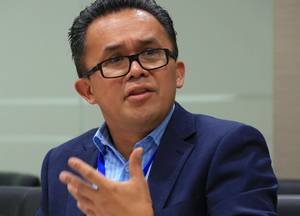 The definition of peace that Emil Bolongaita learned at the Kroc Institute was that peace is the work of justice, an idea espoused by the Institute’s founder and University of Notre Dame President Emeritus, Rev. Theodore “Ted” Hesburgh.

That way of thinking about peace was new to him and shaped his career as an academic, a consultant, a development banker, and an anti-corruption advocate. Emil is now a Distinguished Service Professor of Public Policy and Management at Carnegie Mellon University and the head of its campus in Australia, while simultaneously working to help establish an international anti-corruption court modeled after the International Criminal Court.

Fighting corruption in developing countries is a throughline in Emil’s career. This passion has led him to take on positions at the World Bank, the U.S. Agency for International Development, and the Asian Development Bank.

“There’s a lot of injustice in corruption,” he said. “When public officials abuse power and authority for their private gain, it has severe consequences for communities and societies. It is a major driver of human rights violations.”

In 2004, Emil was awarded the Kroc Institute’s Distinguished Alumni Award for an anti-corruption project he was overseeing in Manila, Philippines. He’s worked to live up to that award since receiving it, he said.

Building on what he learned from the late Guillermo O'Donnell, Professor Emeritus of Political Science at Notre Dame, he is trying to help strengthen the rule of law in countries, including the United States, where authoritarianism may take root.

“When that happens you create a perfect environment for corruption because risk becomes minuscule for top officials and opportunities suddenly present themselves,” he said.

Emil is one of the people working through Integrity Initiatives International (III), a non-governmental organization, to build support among governments across the globe for establishing a new international anti-corruption court. Countries across Asia, Africa and Latin America that have suffered from corrupt leadership are particularly interested because such a court could provide a legal mechanism to recover assets taken by rulers that are hidden in financial capitals and tax havens.

“The plan of action is to gather enough countries to establish an international treaty that will create and fund this international anti-corruption court,” he said.

Support for the International Criminal Court started with 60 countries and has grown to 124. Following this model, Colombia has now started the process of establishing the international anti-corruption court by proposing it at a United Nations Security Council hearing. Emil and his colleagues at III are asking other governments to support this proposal. He acknowledges that this is difficult, but he makes the case that it is in the best interest of countries to be a part of this.

“The evidence is compelling: the costs of not establishing a court are far higher than establishing it, and its impact will be far reaching,” he said.

The work is slow and happens alongside his academic and administrative work. Although Emil considers himself a practitioner at heart, he learned the value of straddling the classroom and the public square during his time at the Kroc Institute.

“I realized at Kroc from the example of its professors and fellows that you can be an academic and still be engaged in work in the field,” he said.