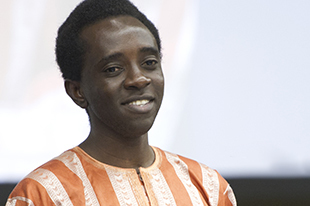 Chernor Bah is Co-founder and Executive Director of Purposeful Productions, an organization that supports girls and their allies to spark and sustain movements for change in the developing world. In 2016, he was appointed by the United Nations Secretary General as an Expert Advisor to the Security Council mandated global study on youth, peace, and security. Until recently, Bah was Chairperson of the Youth Advocacy Group, part of the Global Education First Initiative of the Secretary-General of the United Nations.

In May 2014, Chernor was honored by the Women's Refugee Commission in New York as a recipient of the "Voices of Courage" award, which honors former refugees who have made significant impacts in their communities and served as examples of perseverance, strength, and hope.

At the Nike Foundation
Before working at the United Nations, Chernor was a brand manager at the Nike Foundation in Addis Ababa, Ethiopia, where he managed the development of a new social communications initiative including a radio drama, a talk show, music, clubs, and other projects designed to inspire girls and change hearts and minds about the value of girls in society.

While working for the Nike Foundation, Chernor also served on UN Secretary-General Ban Ki Moon's Special Initiative on Education, where he chaired the Youth Advocacy Group for Education. In this role, he represented the voices of young people at the highest levels of global policy discussions and helped mobilize youth by advocating for comprehensive, quality, inclusive education.

"Growing up in Sierra Leone, I saw first-hand the effects of youth exclusion," Chernor says. "This led not only to a period of war defined by unspeakable violence, but also of lost opportunities, including high illiteracy, high unemployment, and extreme poverty.

"There is hardly a more sure way to 'plan for poverty' than to fail to empower young people or to work with us to build a future that we will own," he says. "I'm passionate about using my story to inspire others and to influence policy and action for youth empowerment."

In Sierra Leone and Mindanao

Prior to pursuing a Master's Degree in International Peace Studies at Notre Dame, Chernor earned an undergraduate degree in political science from Fourah Bay College at the University of Sierra Leone. Following that country's 11-year civil war, he founded a child-advocacy organization and presented a report on the plight of Sierra Leonean children to the Truth and Reconciliation Commission.

Chernor also has worked for the UN Mission in Sierra Leone, as executive producer for a UN-sponsored children's radio program and as a UN youth advisor in New York and Liberia. For his Kroc Institute graduate internship, Chernor worked with Catholic Relief Services in Mindanao in the Philippines.

"Before arriving at the Kroc Institute, I had lived through a brutal conflict and I was increasingly cynical about human nature," Chernor says. "My studies helped me better understand the reasons for violent conflict and injustice and gave me the tools to understand and contribute to a more peaceful and equitable world. I can only hope this is what I will spend every day of my life working towards."