Unchopping a Tree: Reconciliation in the Aftermath of Political Violence 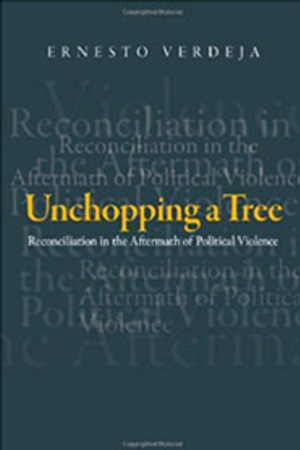 Political violence does not end with the last death. A common feature of mass murder has been the attempt to destroy any memory of victims, with the aim of erasing them from history. Perpetrators seek not only to eliminate a perceived threat but also to eradicate any possibility of alternate, competing social and national histories.

In this timely and important book, Ernesto Verdeja develops a critical justification for political reconciliation. He asks the questions “What is the balance between punishment and forgiveness?” and “What are the stakes in reconciling?”

Developing a normative theory of reconciliation that differs from prevailing approaches, Verdeja outlines a concept that emphasizes the importance of shared notions of moral respect and tolerance among adversaries in transitional societies. Drawing from reconciliation efforts around the world—and interviews with people involved in such endeavors—Verdeja debates how best to envision reconciliation while taking into account the very significant practical obstacles that confront such efforts.