The Puzzle of Peace: The Evolution of Peace in the International System 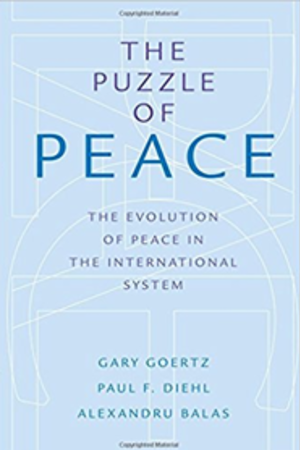 The Puzzle of Peace moves beyond defining peace as the absence of war and develops a broader conceptualization and explanation for the increasing peacefulness of the international system.

The authors track the rise of peace as a new phenomenon in international history starting after 1945. International peace has increased because international society has developed a set of norms dealing with territorial conflict, by far the greatest source of international war over previous centuries.

These norms prohibit the use of military force in resolving territorial disputes and acquiring territory, thereby promoting border stability. This includes the prohibition of the acquisition of territory by military means as well as attempts by secessionist groups to form states through military force. International norms for managing international conflict have been accompanied by increased mediation and adjudication as means of managing existing territorial conflicts.

“This rewarding book contains an insightful analysis of the history and causes of war and peace. It’s filled with relevant evidence and original observations."
— Steven Pinker, Johnstone Professor, Harvard University, and author of The Better Angels of Our Nature: Why Violence Has Declined

"The Puzzle of Peace presents the most rigorous and systematic attempt thus far to define peace, to trace the evolution of international peace since 1900, and to demonstrate that the significant increase in peace relationships since 1945 is due to international territorial norms and conflict management institutions. This path-breaking book is essential reading for international relations scholars and others concerned with the enduring issues of peace and conflict.”
— Jack S. Levy, Board of Governors' Professor of Political Science, Rutgers University