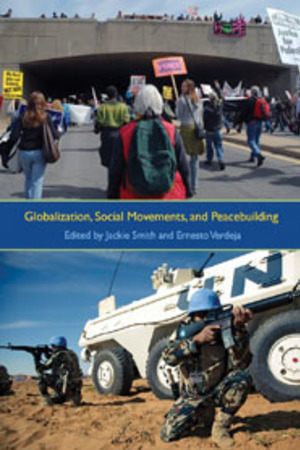 Each year, governments spend billions of dollars on peacekeeping efforts around the world, and much more is spent on humanitarian aid to refugees and other victims of armed struggle.

Yet, research shows that nearly one-half of all countries experiencing civil war have renewed violent conflict within five years of a peace agreement. How do we account for such a poor track record?

This volume, edited by Jackie Smith and Ernesto Verdeja, considers how global capitalism affects fragile peace processes, arguing that the international economic system itself is a major contributor to violent conflict.

By including the work of anthropologists, economists, sociologists, and political scientists, this book presents a broad yet thorough exploration of the complexities of peacebuilding in a global market economy.

Included in the volume are specific studies of Africa, Asia, and the Middle East, as well as considerations of conflicts on a global scale.

"This book puts forward the important argument that peacebuilding is not just about what happens at local war-torn levels; it is global policies that matter. In particular groups committed to humanitarian or human security goals can only have a marginal impact if they fail to challenge the dominant neo-liberal discourse. The argument is substantiated through several fascinating themes and cases contained in the individual chapters."
— Mary Kaldor, professor of global governance, London School of Economics and Political Science

"Jackie Smith and Ernesto Verdeja have produced a compelling and timely volume calling for an epistemic shift in peace research and policy. Detailing the structural violence of neoliberal globalization and its framing of approaches to conflict and post-conflict situations, the authors switch focus from elites and their security interests to civil society and social justice movements as the foundation for enduring peacebuilding. This volume effectively redefines the field of peacebuilding as an emancipatory process instead of a legitimation of extant power relations."
— Philip McMichael, professor of development sociology, Cornell University