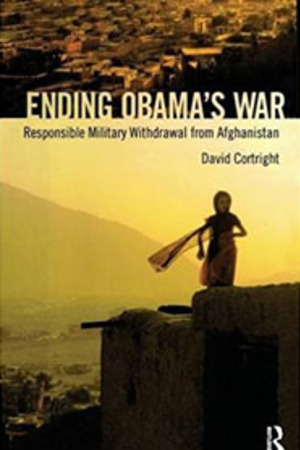 During his presidential campaign, Barack Obama repeatedly criticized the Bush administration’s policy of invading and occupying Iraq, but he was equally firm in declaring his support for the U.S. military mission in Afghanistan. In his widely quoted speech at a Chicago antiwar rally, Obama declared, “I’m not opposed to all wars. I am opposed to dumb wars.”

It was thus no surprise that President Obama expanded the U.S. military commitment in March and then again in December 2009. And now, smart or not, Afghanistan is Obama’s war.

When Obama announced his intention to begin military withdrawals from Afghanistan just 18 months after sending more troops to the country, the reactions ranged from ridicule to disbelief. Why send tens of thousands of additional troops only to remove them soon afterward? To many critics, the announcement seemed to continue the folly of Obama’s withdrawal from Iraq.

In these pages, David Cortright offers a critical analysis of U.S./NATO military policy in Afghanistan and Pakistan and examines alternative strategies for preventing terrorist insurgency and advancing development and human rights. He critiques the strategic and political assumptions undergirding military surge policies and illuminates the worsening security situation and growing influence of the Taliban.

Cortright pays particular attention to the status of women and shows how responsible military withdrawal enhances their chances instead of risking them as often disingenuous critics contend.

Cortright’s goal is not only to hold Obama to his stated intention to withdraw from Afghanistan beginning in July of 2011, but to do so in a way that yields true human security—better political leaders, more aid workers, and many more educated Afghans, women as well as men. As a longtime peace activist and advocate of diplomatic alternatives, Cortright speaks with a moral authority unrivalled among the chorus of commentators castigating Obama’s policies.

"In his new book, David Cortright makes a compelling case for a comprehensive calibrated strategy of military disengagement that offers the U.S. and its partners the most realistic chance of achieving their objectives in Afghanistan and the region in a cost effective and timely manner.”
— Lawrence Korb, former Assistant Secretary of Defense

"A balanced, well-documented critique of the war in Afghanistan combined with a thoughtful plan for reducing our military footprint responsibly. Essential reading for those seeking a new way forward in Afghanistan."
— Lt. General (USA, Ret.) Robert G. Gard, Jr., Ph.D.