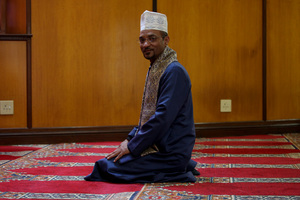 The 2-minute film tells the compelling story of Omar’s fight against apartheid (and the price he paid for it), as well as his work as an imam, inter-religious peacebuilder, and scholar and teacher at the University of Notre Dame’s Kroc Institute for International Peace Studies. Watch video »

The video also features comments from Nobel Peace Prize winner Archbishop Desmond Tutu, as well as a cameo by Kroc Institute director Scott Appleby. Produced by Notre Dame with NBC television, it first aired at halftime during the Notre Dame vs. Michigan State game on September 17.

Omar earned an M.A. and Ph.D. in religious studies from the University of Cape Town and an M.A. in peace studies from the Kroc Institute. His research and teaching focus on the roots of religious violence and the potential of religion for constructive social engagement and inter-religious peacebuilding. He is co-author of Religion in Public Education: Options for a New South Africa and a contributor to the Encyclopedia of Islam and the Muslim World. With two other scholars he is co-editing A Dictionary of Christian-Muslim Relations (forthcoming from Cambridge University Press, 2012).

In addition to being a university-based researcher and teacher, Omar serves as imam at the Claremont Main Road Mosque in Cape Town, South Africa, and as an advisor to international organizations.