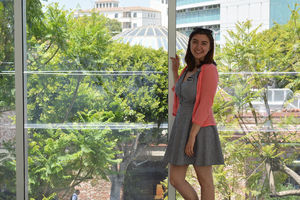 Sophomore Amber Grimmer traveled to museums in Los Angeles, California, and Chicago to explore the impact that key pieces of art relating to social change have had on the community, artists, and social commentary.

From the capital of Uganda, to American Indian reservations, to museums across the country, Notre Dame students, including many enrolled in peace studies, travel around the world to carry out academic projects with help from the College of Arts and Letters Undergraduate Research Opportunity Program.

With UROP’s financial support, students are able to engage in on-site research that can be used as the basis for a variety of independent projects, including a senior thesis.

The experiences made possible through UROP not only lead to meaningful results, but also provide students with valuable life experiences they might not otherwise have.

“I couldn’t have afforded my summer research in Uganda if I didn’t have the UROP funding,” said senior Adam Moeller. “It was hugely helpful. The flights are really expensive, living in the city actually costs a lot more than you would think, and there were a lot of other expenses that accompanied my research.”

Sophomore Amber Grimmer, an international economics and peace studies major, has always been interested in the topic of social justice. After taking an honors humanities seminar, she was curious as to how she could relate this topic to modern art.

With funding from UROP, she traveled to museums in Los Angeles, California, and Chicago to explore the impact that key pieces of art relating to social change have had on the community, other artists, and social commentary itself.

“In school, we are taught how to analyze texts or scientific evidence very well,” Grimmer said. “My UROP project helped me to learn how to analyze something new — art. This has made me more creative in learning and developing new ideas and arguments.”

Grimmer, who is also pursuing a poverty studies minor, hypothesized that art forms such as Dadaism, Mexican Muralism, and Social Realism paved the way for other art to be a form of social commentary and movement.

“The overall experience was fantastic and formative,” she said. “I enjoyed the flexibility to learn about what I love in a novel way that is difficult to experience in the classroom.”

Grimmer now encourages other Arts and Letters students to apply to the grant program —   whether their research idea is big or small.

“Independent research can help you with a bigger project later on, it can develop your skills, and it can finally answer an intellectual question you’ve been asking,” Grimmer said. “For me, it accomplished all three.”

Gender, sexuality, and morality in Uganda 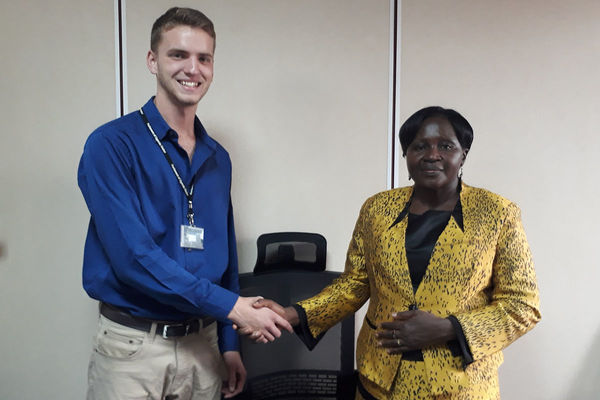 Adam Moeller with Judith Alyek, chair of the Ugandan parliamentary committee on HIV/AIDS.

Adam Moeller, a history and economics major, spent eight weeks conducting interviews with members of the LGBT community in Kampala, Uganda, for his senior thesis.

In Uganda, where homosexuality is illegal, members of the LGBT community consistently face intense discrimination, violence, and isolation. With no academic sources on the topic, and very few articles written prior to the last few years, Moeller hopes to provide one of the first historical accounts of the community.

“My research should hopefully dispel some myths and show that these people have been there for a long time and have faced different challenges that a lot of people don’t think of,” Moeller said. “That’s the value that this project has to all of the people that I interviewed. Something like this hasn’t really been done before.”

Before traveling to Kampala, Moeller worked closely with his adviser to perfect his interviewing skills and prepare a list of questions to reference during his three dozen interviews with identified members of the LGBT community, activists, allies, politicians, and people in religious institutions.

“It’s a history project, so I was really trying to elucidate how this community has evolved over time and the difficulties that it faced,” Moeller said. “I asked the LGBT participants, if they were comfortable, about their personal lives and how it was growing up in Uganda, because that’s really the only way that you could gain an understanding of this topic in the ’80s or ’90s.”

With more than 50 hours of interviews, Moeller is well prepared for his senior thesis project, along with his future in teaching. He plans to teach after graduation and has applied for a Fulbright grant to teach English in Malaysia.

“I think my summer researching this topic was an invaluable opportunity to grow in my cultural competency,” he said, “and in my ability to address complex social systems without being cynical or disheartened.” 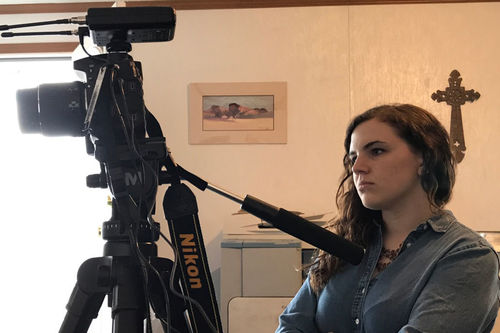 Stotz, a neuroscience and behavior major and education, schooling, and society minor, spent 10 days interviewing and filming students and teachers at the schools, which are part of the American Indian Catholic Schools Network, managed by Notre Dame’s Alliance for Catholic Education.

She and her creative partner, junior Tyrel London, created a promotional video to raise awareness of the schools’ missions and programs that benefit children on the reservations.

“Educational equality is very important to me, so it was really interesting to be able to go to the reservation and see a kind of school I’d never seen before,” said Stotz, who plans to teach in the ACE program after graduation. “I was able to see the very positive influence the Catholic schools have on the kids. They’re providing opportunities that the children deserve and giving them a chance to have a good education.”

As Stotz prepares for her own future in education, the time spent at Red Cloud and De La Salle Blackfeet will be helpful in developing her teaching style.

“It definitely opened my eyes to the ways that teachers approach different students’ needs. I think that the teachers I met have a good understanding of the kids’ living situations on the reservation,” she said. “The way that they approach teaching is very respectful to the kids’ traditions and how they’re forming an identity as Native American students and as part of the greater world.”

Originally published by Teagan Dillon at al.nd.edu on December 13, 2017.