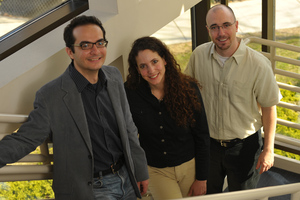 Three new faculty members who joined the Kroc Institute this academic year are bringing new perspectives on peace into the classroom while contributing to research on religion, conflict, ethics, political violence, and peacebuilding.

Atalia Omer, assistant professor of religion, conflict, and peace studies, recently earned her Ph.D. from Harvard. Her research focuses on ethno-national conflicts and the relationship between religion, nationalism, justice, peace, and conflict. She currently is working on a book manuscript titled After Peace: How Does the Israeli Peace Camp think about Religion, Nationalism, and Justice?, which examines the movements dedicated to working for peace with Israel’s Arab neighbors. Omer teaches Religion, Culture, and Peacebuilding and Introduction to Peace Studies. She also will participate in a major research project at the Kroc Institute comparing Islam and Roman Catholicism. An Israeli-American citizen, she is fluent in Hebrew, proficient in Arabic, and is an expert on the Israeli-Palestinian conflict.

Jason Springs, assistant professor of religion, ethics, and peace studies, recently earned his Ph.D. from Harvard. His research examines how political theory, religious ethics and moral theology can be applied to conflict transformation and peacebuilding. Most recently, he has been researching how religious pluralism in contemporary Europe might contribute to conflict transformation, focusing on freedom of speech in the Netherlands, the use of shari’a courts in Great Britain, and the wearing of Islamic headscarves in France. His new book, forthcoming from Oxford University Press, examines the dimensions of social theory in post-liberal theology and applies them to ethical concerns and political issues. In the classroom, Springs teaches courses that focus on ethics and restorative justice as well as religion, multiculturalism, and the challenges of peace.

Ernesto Verdeja, assistant professor of political science and peace studies, earned his Ph.D. from the New School for Social Research in 2005. His research focuses on political violence (genocide, war crimes, crimes against humanity), transitional justice, forgiveness, and reconciliation. He has published numerous articles, a book chapter, and has edited two short books on transitional justice and civil society in Cuba. His book Unchopping a Tree: Reconciliation in the Aftermath of Political Violence will be published by Temple University Press in October 2009, and he is working on a book manuscript that examines the causes of genocide and the role of bystanders.  He teaches Introduction to Peace Studies and courses in the dynamics of modern genocide.