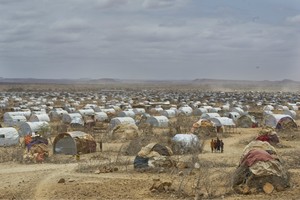 An image of a refugee camp in Ethiopia. Photo: UN Multimedia

Today on World Refugee Day, the Kroc Institute for International Peace Studies honors the bravery and resilience of the over 70.8 million refugees and forcibly displaced individuals who have fled their homes, and often homeland, in search of protection. We are currently seeing unprecedented numbers of refugees and internally displaced persons due to war and genocide, ethnic and religious hostility, structural violence, and, increasingly, environment harm caused by climate change.

Not only has the number of refugees and forced migrants worldwide reached unparalleled levels, but growing xenophobic nationalism globally has contributed to increased risks for these forced migrants. Many governments have erected draconian policies meant to stop migration. For example, the United States government has continued its practice of separating refugee children from their parents and detaining them in prison-like conditions. Such actions violate decades-long established international human rights law, fail to deter refugees from fleeing violence, and traumatize young children who have already fled horrific violence.

In the midst of this crisis, the work of the Kroc Institute and in the peace studies field is paramount.  The Kroc Institute’s interdisciplinary research and the peacebuilding work conducted by many of Kroc’s 1,700 alumni around the world seek to address the greatest threats facing humanity, including many of the root causes that propel forced migration. Specifically, those working in the field of peace studies strive to understand the causes of armed conflict; develop ways to prevent and resolve war, genocide, terrorism, and gross violations of human rights; and identify strategies to build peaceful and just systems and societies.

Written by Erin B. Corcoran, Executive Director, on behalf of the Kroc Institute for International Peace Studies