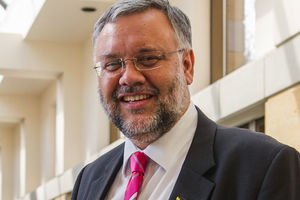 Ebrahim Rasool, South Africa’s Ambassador to the United States, will deliver the 20th Annual Rev. Theodore M. Hesburgh, C.S.C., Lecture in Ethics and Public Policy at 4 p.m., April 8 (Tuesday), in the Hesburgh Center for International Studies Auditorium at the University of Notre Dame.

Rasool’s lecture, “Relic of the Past or Template for the Future: Nelson Mandela’s Impact on Peacemaking and Statecraft in the 21st Century,” is free and open to the public.

Before his appointment as Ambassador to the U.S., Rasool held numerous positions in the South African government, including Member of Parliament in the National Assembly, Special Advisor to the State President of the Republic of South Africa, and Premier (governor of the Western Cape Province).

He has a long history of involvement in the anti-apartheid struggle and has been active in both the Islamic and interfaith movements, including efforts to mobilize Muslims and the broader faith communities for a deeper understanding of Islam and faith. Among his many awards, he is the recipient of the Nelson Mandela Award for Health and Human Rights, presented to him by the Kaiser Family Foundation in 1998.

“I am delighted that Ambassador Ebrahim Rasool has accepted our invitation to deliver the 2014 Hesburgh Lecture,” said Scott Appleby, the John M. Regan, Jr. Director of the Kroc Institute. “Like his mentor and friend, the late Nelson Mandela, Ambassador Rasool was a courageous leader in the anti-apartheid struggle who was imprisoned and also placed under house arrest by the government.

“In addition to his diplomatic and political skills, he comes to us as an Islamic peacebuilder, experienced in mobilizing people of faith in the nonviolent struggle against oppression. We look forward with great anticipation to his presence among us.”

Past Hesburgh lecturers have included: