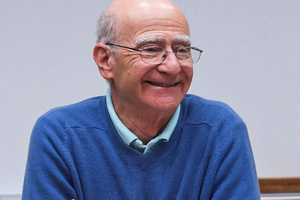 Sidney Tarrow, Emeritus Maxwell M. Upson Professor of Government at Cornell University, will deliver the 21st annual Hesburgh Lecture in Ethics & Public Policy on April 30 (Thursday) at 4 p.m. in the Hesburgh Center for International Studies Auditorium at the University of Notre Dame. The Hesburgh Lecture is free and open to the public.

Tarrow’s lecture, “Seeking Peace in Wartime; Opposing War in Peacetime” will explore the effects of recent wars — the Ukrainian war, the violent outcome of the Arab Spring, the ISIS takeover of parts of Iraq and Syria — on the U.S. peace movement.

Since September 11, 2001, the United States has been fighting in conflicts that elude the laws of war in what is legally a time of peace. For the U.S. peace movement, this has had contradictory effects. Tarrow's lecture will explore these contradictions and propose a path for those who seek to advance the cause of peace.

“His enduring focus on grass roots movements for social change, peace and justice is inspiring and instructive to those in the scholarly and peacebuilding communities.”

Tarrow’s most recent books, which focus on social movements and contentious politics, include War, States, and Contention: A Comparative Historical Study (forthcoming) and The Language of Contention. He is a fellow of the American Academy of Arts and Sciences.