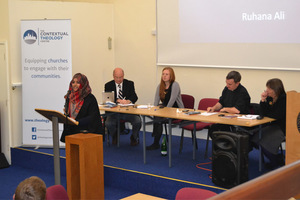 Ruhana Ali (at podium) presented research based on the experience of Muslims and other religious minorities in the U.K.

The powerful force of global migration was the focus of a conference this week (Oct. 14-15) that showcased the research of the Global Migration Working Group — one of several research teams that are part of Contending Modernities, a Notre Dame-based research initiative that involves scholars from around the world.

The conference took place at the Notre Dame Centre in London and in the religiously and ethnically diverse borough of Tower Hamlets in East London. Participants included ethicists, theologians, historians, and legal scholars from the United States, Europe, Canada and Australia; leaders of civil society organizations; members of the Bengali Muslim, English Jesuit, and Anglican communities; and a Member of Parliament from London's most religiously and ethnically diverse district.

“The global expansion of migration in recent years has ushered in major social and economic changes, as well as profound ethical challenges concerning how people are to coexist in pluralistic societies,” said Scott Appleby, Notre Dame professor of history and peace studies, who directs Contending Modernities.

“London and other major urban centers in Western Europe and North America are living laboratories in which new models of pluralist citizenship are today being formulated, implemented, and contested.”

The goods of creation

The Archbishop of Dublin, Diarmuid Martin, built his keynote address on "the universal destination of the goods of creation," a principle of Catholic social teaching that, he said, "is not a naive affirmation of that everything is at the disposal of everyone or anyone." Rather, "there is a social mortgage on all property . . . which is never simply private, never withdrawn from social responsibility." The principle applies today especially to intellectual property and to the freedom of movement of goods and services, "but also to the movements of the talents and aspirations of people," he said.

Drawing on his experience working with international organizations, Archbishop Martin lamented the fact that the application of this principle "remains very much on the intellectual level, especially when applied to migration." No single United Nations organization has an overall vision on migration policy, for example, and cooperation at the international level is only beginning and highly fragmented. "The affirmation that everyone is born with the right to use the goods of the earth can only flourish," he argued, "if it exists within a juridical order on a national and international level."

State multiculturalism and its critics

The conference participants addressed the flagging fortunes of "state multiculturalism." State multiculturalism involves the range of efforts by many liberal Western governments — in response to increasing religious and cultural diversity caused by migration — to develop policies that respect distinctive cultural identities and to promote social cohesion at the national level by accommodating and/or integrating cultural and religious minorities into the wider political society. In recent years, however, such state-sponsored multiculturalism has come under criticism by those citing concerns ranging from national security to social fragmentation, resulting in a repeated call for “the end of multiculturalism."

In responding to this dilemma, Vincent Rougeau, Dean of Boston College Law School, offered a critique of the legal philosophies underlying current laws restricting the rights of migrants and explored an alternative conception, that of jus nexi, which uses rootedness as a principle of membership acquisition. Jus nexi decouples a legitimate claim to citizenship from a formalistic attachment to the legal status of an individual upon entry into a territory, moving beyond anachronistic status-based conferrals of rights and duties toward the recognition of rights based on social and relational criteria. Rougeau situated the concept in relational ideas of participation and membership that grow out of Catholic social thought.

Other conference participants, such as Ruhana Ali, a researcher and consultant working in Tower Hamlets, drew on the experience of Muslims and other religious minorities in the UK. Ali and her colleagues linked Rougeau's analysis to the practical experience of multi-ethnic, broad-based community organizing and citizenship formation in London. They called on leaders and policymakers to reject the narrowly reasoned contractarian and territorial notions of citizenship and community membership that underlie current debates around immigrant assimilation and access to citizenship.

David Barclay of East London's Contextual Theology Centre — Notre Dame's primary institutional partner in this working group — elaborated on "Making Multiculturalism Work," his published report for Contending Modernities. For multiculturalism to overcome its failures, he argued, it must be focused not on top-down state imperatives, but on an orthopraxis, a set of habits and practices necessary to integrate religious and cultural differences rather than simply tolerate or segregate them.

Barclay identified two key habits of a healthy multiculturalism:  working together toward a common, tangible goal and sharing core motivations for doing so. Such practices form the basis of what the political theorist Danielle Allen has called "political friendship," a concept Barclay developed as a way of avoiding the pitfalls of secular-liberal approaches to multiculturalism that restrict participation in public projects to those who are considered "sufficiently progressive" on a range of social and moral issues. Rather than apply the "progressive litmus test," he argued, programs of religious-secular collaboration should apply the "relational test," a principle of inclusion that focuses on the ability of disparate individuals and groups to work together around and through their differences.

Other publications generated by the Global Migration Working Group include two booklets for practitioners that present the rationale for Christian and Islamic engagement in common action. They also include research reports and papers on multiculturalism; religion and moral commitments; community organizing among faith communities; and other topics. The conference papers will be the basis for a scholarly volume on these themes.

Contending Modernities brings religious and secular scholars, groups, communities, and institutions into collaborative research and education projects for the common good. The initiative does so through the establishment of multi-disciplinary, cross-cultural working groups of scholars, practitioners and public intellectuals. More information is available on the Contending Modernities website.