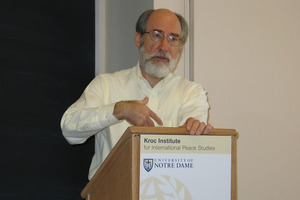 When a gunman shot 10 Amish schoolgirls in a Pennsylvania schoolhouse in 2006, the local Amish community responded swiftly with a message of forgiveness. The speed and spontaneity of this response are among the hallmarks of “Amish forgiveness,” said Donald Kraybill, speaking on September 26 at Notre Dame’s Hesburgh Center.

Kraybill, distinguished college professor and senior fellow at the Young Center for Anabaptist and Pietist Studies at Elizabethtown College in Pennsylvania, was the featured speaker for the annual John Howard Yoder Dialogues on Nonviolence, Religion and Peace. He is the author of the book “Amish Grace: How Forgiveness Transcended Tragedy,” and many other books on Amish life.

For the Amish, forgiveness is a collective endeavor “like a barn raising,” Kraybill said. It entails not only a shift in mindset but also specific, intentional behaviors. For example, members of the community attended the funeral of gunman Charles Roberts and gave money to his widow. The Amish are members of the Anabaptist Christian tradition and find the roots of forgiveness in the words of the Lord’s Prayer, Kraybill said.

Kraybill also addressed larger issues raised by the Amish response to the schoolhouse shooting. “The need for forgiveness is not limited to a faith setting,” he said. “It’s also needed in secular communities.” While apology can be a catalyst for forgiveness, it may not always be necessary for forgiveness to occur, Kraybill said. “We can’t require apology, because if it doesn’t happen the victim can get stuck,” he said.

Are there any peacebuilding success stories that include apology/forgiveness? Who are the heroes of these stories? What contextual factors aided the process of apology and forgiveness?

How likely might forgiveness support impunity, offer acceptance of injustice without behavioral change, and, in fact, increase the possibility of violence?

The Yoder Dialogues are named in honor of John Howard Yoder, a professor of theology at Notre Dame from 1968 until his death in 1997. Yoder’s teaching and scholarship profoundly influenced theological discussions about war, social justice and the relationship between church and state. He was a founding fellow of the Kroc Institute, where he initiated courses on war, law and ethics and nonviolence. His books include “The Priestly Kingdom,” “What Would You Do?” and “The Politics of Jesus.”