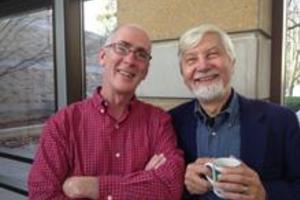 It began with a coffee break and turned into a research collaboration. Two Kroc professors — Patrick Regan, professor of political science and peace studies, and Peter Wallensteen, Starmann Research Professor of Peace Studies and senior professor at Uppsala University in Sweden — were refilling their cups when they started to debate the role of federalism in civil war and peace.

In contrast, Peter Wallensteen, an expert in international conflict resolution, has long argued in his writing that federalism can be a form of “peace-making,” providing a built-in mechanism for ensuring minority groups are protected from the potential tyranny of the majority and thereby avoiding some wars of secession. For example, he said, “India at the time of independence had hundreds of principalities and languages. When the constitution was rewritten, each region with a distinct language got its own state with some autonomy — that’s a way to prevent war and keep the unity of the country.”

Using the methodologies of political science and peace research, the two scholars set out to test Regan’s argument. Focusing on the cases of the United States and the former Yugoslavia, they also tested the argument against cross-national data from all the civil wars of the 20th century.

Their findings — which appear in their new co-authored article, “Federal Institutions, Declarations of Independence, and Civil War” in the journal Civil Wars — show that federalist countries in which the local units are able to command their own standing armies or independent militias create the mechanisms for relatively short, but bloody wars (as opposed to longer, guerrilla-style civil wars, often with fewer casualties, in which rebels are usually outnumbered and outgunned by government forces).

The researchers also demonstrated that, in a federalist country with more than one army or militia, a formal declaration of independence from a state/province/unit signals a credible commitment to go to war if necessary. To prevent war, the central government must take this signal seriously and be willing to engage in negotiations rather than clamping down and becoming more authoritarian, Regan said.

“Some federalist countries do figure out how to make peace, and but those that don’t figure it out can find themselves in a big war,” he said. “The key is to check the signals. If I am a state or province, and I signal to the central government that I am about to declare independence, you had better listen,” Regan said. “Come to the table and don’t ignore me if you want peace.”

“I still think federalism can be a way to solve conflict, but not all the time,” said Wallensteen. “A federal system may last for a long time and be functional. However, when it breaks down, you can get a very bad war quickly because both sides are armed.”  To avoid that, he said, “The central government must be open-minded and responsive to concerns in different parts of the country before it escalates to armed conflict.”

Patrick Regan is the author of several books, most recently Sixteen Million One: Understanding Civil War. He serves on the advisory board of the Correlates of War Project and is the immediate past President of the Peace Science Society (International).

Peter Wallensteen is the founder of the internationally acclaimed Uppsala Conflict Data Program, which provides open access to data on armed conflict and peace agreements. He is the author of several books, including Understanding Conflict Resolution: Peace, War, and the Global System, now in its third edition. He is a strong advocate of the Swedish tradition of coffee breaks for stimulating academic insights.