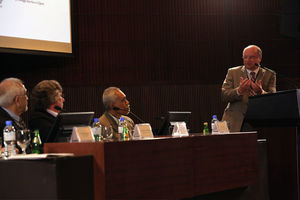 Scholars from across the Middle East, Europe, Asia, and North America gathered in Doha, Qatar, March 3-4 for a symposium focused on advances in science and technology that raise fundamental questions about human life, suffering, and death. The symposium was co-sponsored by Contending Modernities, the Notre Dame global research project on Catholic, Muslim, and secular interaction, in partnership with Georgetown University's Islamic Bioethics Project and the Qatar National Research Foundation.

Scott Appleby, professor of history and director of Contending Modernities at Notre Dame’s Kroc Institute for International Peace Studies, said the symposium aimed to “enhance understanding and collaboration among Muslim, Christian, and secular thinkers who are coming to terms with — and shaping the debates about — dramatic advances in science and technology.

“There is a pressing need for the great religious as well as secular traditions to have a voice in the bioethical and social justice questions raised by 21st century medical technologies,” Appleby said.

The first three sessions of the symposium featured ethicists, historians, theologians and philosophers of science, whose papers and presentations focused on the nascent field of Islamic bioethics.

An afternoon session was devoted to the particular challenges and opportunities posed by developments in the field of neuroscience. Scholars provided examples from the Catholic and secular bioethical traditions of the reception of rapid developments in neuroscience and medical technology. The concluding session of the day featured three speakers, one representing each tradition, who proposed next steps in the collaboration, with an eye to bringing religious conceptions of the human person and human dignity to the forefront of the contemporary debates around the use and availability of medical technologies.

In a workshop on the second day, members of the Contending Modernities “Science and the Human Person” working group expanded on the major themes raised during the conference and charted the next stages of the group’s research. The coming months will see continued dialogue on the Contending Modernities blog and the publication of a volume on bioethics and human personhood from Catholic, Muslim, and secular perspectives.

Contending Modernities brings religious and secular scholars, groups, communities, and institutions into collaborative research and education projects for the common good. The initiative does so through the establishment of multi-disciplinary, cross-cultural working groups of scholars, practitioners and public intellectuals.