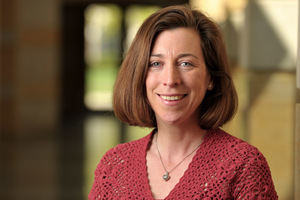 Surprisingly soon after it was published in England in 1869, John Stuart Mill’s essay on women’s rights, "Subjection of Women," was embraced by intellectuals around the world, according to political theorist Eileen Hunt Botting.

“I was really struck by its acceptance in non-western cultures almost immediately,” said Botting, who noted that an earlier feminist work, Mary Wollstonecraft’s Vindication of the Rights of Woman (1792), received scant attention outside of Britain, Europe, and the United States.

In contrast, “Mill’s book was translated into 26 non-English editions by the early 20th century, with serious philosophical responses in Russia, Chile, and India,” Botting said. “It really spurred a global cross-cultural dialogue on women’s rights.”

Botting used a grant for faculty fellows from the Kroc Institute for International Peace Studies to commission translations of commentaries on Mill’s work by six influential feminist thinkers, both men and women. She studied Grigory Blagosvetlov, Nikolai Mikhailovsky, and Maria Tsebrikova (writing in Russian in 1869-70); Martina Barros Borgono (writing in Spanish in Chile in 1872); and Govind Vasudev Kanitkar and Jivabhai Revabhai Patel (writing in Marathi and Gujarati in colonial India in 1902-1908). Her article comparing and analyzing these works, co-written with undergraduate political science major Sean Kronewitter ‘13, was recently accepted for publication as “Westernization and Women’s Rights: Non-Western European Responses to Mill’s 'Subjection of Women,' 1869-1908” in the academic journal Political Theory.

Among the lessons of this research is that “ideas matter, and they can be a powerful force for global political change,” Botting said. “The concept of women’s rights is central to peace studies, and this study explores the issue of how women came to be seen as human beings deserving of human rights and respect.”

Mill’s utilitarian arguments in favor of women’s rights got such a great international reception, Botting said, in part because he writes at a time when the means for distributing books is growing, and in part because he was already a prominent politician and philosopher (his influential work On Liberty was published in 1859).

“Also, of course, he was a man, and he garnered a lot of support and authority from his gender and his powers of persuasion among men,” she said. “Male legislators all over the world quoted him beginning in the 1890s, and then we begin to see women’s suffrage on a national level.”

Mill’s Eurocentric perspective was sometimes mimicked by writers in non-European countries and other times was challenged and transcended by those in other cultures, Botting said.

“It’s important to know that, going way back, indigenous intellectuals had a lot to say about women’s rights in their own cultural contexts, and they were leaders in their own social movements to end the subjection of women,” she said. “Many of them engaged Mill critically and applied his ideas in creative and culturally sensitive ways.” Mill’s writing was problematic for its European bias, she said, but “he also was an early model of the importance of cross-cultural dialogue with fellow intellectuals and activists on issues of social reform.”

Botting, an associate professor of political science at Notre Dame, is now writing a book on how Mary Wollstonecraft and John Stuart Mill shaped the development of the modern concept of women's human rights. She is also finishing editing a scholarly edition of Wollstonecraft’s Vindication of the Rights of Woman, the first philosophical book on women’s rights as human rights, which will be published by Yale University Press in 2013.