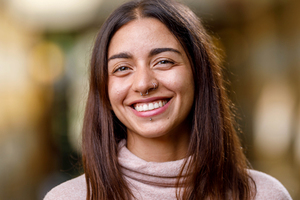 Doctoral student Ana Sanchez-Ramirez has been named as the 2017 – 2018 Darby Fellow.

Ana is a Ph.D. student in history & peace studies. She holds an M.A. in Ethnic Studies and a graduate certificate in Women Studies and Gender Research from Colorado State University, as well as a B.A degree in anthropology from the National University of Colombia.

Ana’s research interests are located in the contexts of violence that developed in Colombia from the 1960s onwards. She has conducted ethnographic research with victim’s movements and their strategies around historical memory. For her master’s thesis, she explored Colombian state narratives on war and peace disseminated in mass media. Ana’s doctoral research focuses on the role of Colombian historiography as a political force that informs how peacebuilding projects are envisioned by the state and other social actors.

About the Darby Fellowship:

A fund established by the Kroc Institute’s Advisory Council in 2010 to support fellowships for doctoral students in peace studies was named in memory of John Darby, professor of comparative ethnic studies at Notre Dame from 1999 until his death in June 2012. The award is given annually to students who exemplify his commitment to rigorous, normatively informed scholarship on peacebuilding and conflict resolution.

From 2002-06, Professor Darby directed a major Kroc Institute research initiative on ethnic conflict that resulted in a substantial body of scholarly and practical work. In 2004, he founded and directed the Peace Accords Matrix (PAM) a unique database and tool for research and peacebuilding, which remains central to Professor Darby’s legacy at the Kroc Institute and worldwide.

Doctoral students Angela Chesler and Steven Savides were named the first recipients of the Darby Fellowship for the 2016-17 academic year.