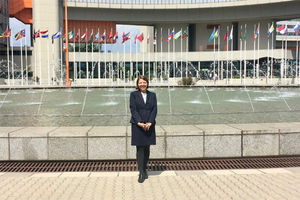 Sarah Bueter outside the UN building

Sarah Bueter, with successive internships now under her belt, has returned to campus for her senior year as a Peace Studies and Theology major with a minor in the Catholic Social Tradition. From January to April 2017, she interned in Washington, D.C., with the Office of International Justice and Peace of the U.S. Conference of Catholic Bishops (USCCB). There, she assisted policy advisors on a variety of international issues including nuclear and arms control issues, drone policy, religious freedom, mining and resource extraction, and human rights.

“My work included composing publications such as the USCCB’s international religious freedom stories, editing and drafting documents to congressional officials, and researching international issues, humanitarian crises, and current events in places such as Indonesia, Yemen, Palestine, Venezuela, and China.” Bueter attributes her ability to navigate these international issues to the firm foundation she built with her peace studies coursework at Notre Dame. While in D.C., she had the opportunity to attend think tank presentations, NGO meetings, roundtable discussions, and congressional hearings.

Bueter pursued additional experience this past summer as an intern to the Holy See Mission to the International Organizations in Vienna, Austria, where the Holy See maintains an office and engages in diplomacy. International organizations such as the Organization for Security and Cooperation in Europe (OSCE) and the United Nations are housed there and, as a result, Bueter was able to monitor UN conferences relating to international arms control initiatives. 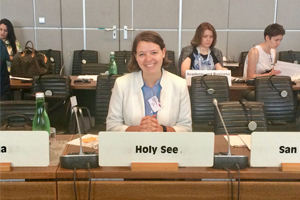 Sarah the seat of the Holy See at the OSCE

“A typical day could include sitting in on a UN meeting with international diplomats and experts, recording the salient points that interest the Holy See, and preparing the relevant documentation.” Bueter found she needed an understanding of the large mechanisms of transnational movements and international peace initiatives, a background she had gained at Kroc.

“This internship was closely aligned with my interests in Catholic approaches to peacebuilding. The meetings I attended mostly revolved around the subjects of nuclear disarmament, nuclear energy for peaceful uses, and the nuclear nonproliferation regime. The Holy See’s engagement represents but one expression of the Church living out her social mission to promote peace and justice in the world.”

Bueter credits the mentorship of professor Gerard Powers of the Kroc Institute for helping to arrange both internships as well as professor Clemens Sedmak and William Purcell of the Center for Social Concerns for supporting her USCCB internship. She also received an Undergraduate European Internship and Service Grant from the Nanovic Institute for European Studies for her internship with the Holy See.

Offering an overarching assessment of her studies, Bueter said: “The brilliance of a peace studies education at Kroc rests not only in its ability to open and enrich the mind, but also to truly transform the heart. Combining modern Catholic Social Tradition with Peace Studies radically changes how one views complex, far-removed conflicts and cases of injustice—not as distanced, statistical issues, but as holistic and, ultimately, personal experiences.”

Powers noted that "Sarah is deeply committed to her faith and how her faith can transform the world in light of the Gospel. She now has seen that transformative faith in action at the highest levels of the Catholic Church's engagement on issues of international justice and peace."