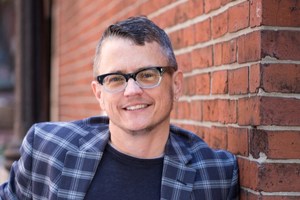 P. Carl, B.A. 1988 and M.A. 1990, has been selected to receive the Kroc Institute’s 2019 Distinguished Alumni Award. Throughout his career, Carl has explored the power of story and the arts to create policy, to facilitate dialogue, and to transform people and systems. He is a longtime artistic director and theater advocate, and now Distinguished Artist in Residence at Emerson College in Boston.

Carl will receive the award and deliver a lecture titled “Caring for Bodies Not Our Own: Storytelling as a Bridge to Radical Understanding” on Tuesday, March 5, at 4:00 p.m. in the Hesburgh Center for International Studies Auditorium.

Established in 2004, the Distinguished Alumni Award honors a graduate of the Kroc Institute whose career and life exemplifies the ideals of international peacebuilding. The award selection committee was impressed by Carl’s “groundbreaking work  connecting  theater  and  the  arts  with justice  and  peacebuilding,  and  [his]  courage  and  compassion  in  addressing  the  complexities  of  race,  class  and gender in both professional and personal contexts.”

As illustrated by his lecture title, Carl is passionate about interrogating whose stories make it to the stage and how they are told and finding ways to promote broader equity and inclusivity in theater. In 2011, from his dining room table in Chicago, Carl founded and launched the online journal HowlRound, that eventually evolved into a collaborative public commons for global theatermakers and “amplifies progressive, disruptive ideas about the art form and facilitates connections between diverse practitioners.” The platform, now part of Emerson College, includes a journal, a blog, and works to convene conversations and events to spark conversation.

In 2018, Carl received an Art of Change fellowship from the Ford Foundation and was a Holtzbrinck Fellow at the American Academy of Berlin during Fall 2018. He is working on his forthcoming memoir, Becoming a White Man (Simon & Schuster, January 2020), which explores his transition from being perceived as a queer white woman to living as a white man.

Throughout his career, Carl has come to see the theater as an important medium for peacebuilding work.

Most recently, he served as the dramaturg for the 2018 premiere of poet Claudia Rankine’s play, “The White Card.” The play sought to unpack racism that unfolds during everyday life events and follows Charlotte Cummings, a black artist who visits the home of two prominent white art dealers in New York City, and the tensions that unfold around a dinner they share.

“Part of the intent of the show was to have a conversation with the audience after the play ends,” said Carl. “You can’t do that very often with a novel or with a film. People come to the theater to be in proximity and to engage in conversation. Just as important as the story that a play presents is the conversation that it generates afterwards.”

During Carl’s campus visit, a dramatic reading of “The White Card” will be performed on Monday, March 4, at 7:00 p.m. in the Hesburgh Center for International Studies Auditorium. Carl will facilitate a conversation following the performance.

“I have always been interested in the theory-praxis relationship,” said Carl. “It really can’t be one thing or the other. I’ve tried to cultivate both parts of that passion, and that model was really the thing that interested me most when I was at the Institute.”

Notre Dame's Kroc Institute, part of the Keough School of Global Affairs, is one of the world's principal centers for the study of the causes of violent conflict and strategies for sustainable peace. The Kroc Institute offers undergraduate and Ph.D. degrees in peace studies and supports the International Peace Studies concentration of the Keough School’s Master Of Global Affairs. The IPS concentration builds on the Institute’s former Master’s in International Peace Studies.