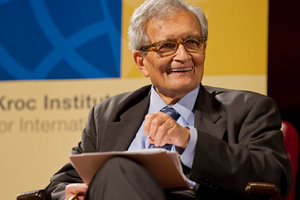 Amartya Sen, the 1998 Nobel Laureate in Economics, will deliver the 18th Annual Hesburgh Lecture in Ethics and Public Policy at 5:30 p.m., April 17 (Tuesday) in Leighton Concert Hall at Notre Dame’s DeBartolo Performing Arts Center. THIS LECTURE IS SOLD OUT.

Sen is best known for his commitment to addressing the challenges facing the world’s poorest people. “Professor Sen has spent a lifetime fighting poverty through research, analysis, and advocacy of human development informed by what the Nobel committee called ‘the ethical dimension,’” said Scott Appleby, director of the Kroc Institute for International Peace Studies. The Kroc Institute established the Hesburgh lectures in 1995 in honor of the Rev. Theodore M. Hesburgh, C.S.C., president emeritus of Notre Dame and a global champion of peace and justice.

This is a free but ticketed event. You can reserve two tickets per
person by visiting the DeBartolo Performing Arts Center Ticket Office
from noon-6 p.m. Monday through Friday or by calling 631-2800.

“Of special interest to Notre Dame is Sen’s vision of how poverty, violence, corruption, denial of human rights, and ethnic, religious and gender discrimination reinforce one another,” Appleby said. “His pragmatic, culturally nuanced, ‘from the ground up’ approach resonates with Catholic Social Teaching and with the Kroc Institute’s emphasis on peacebuilding that begins with local communities and strategically builds national and transnational partnerships for peace.”

One of Sen’s best known works, Development as Freedom (1999), argues that people cannot lift themselves out of poverty unless they have political freedom, civil rights, economic opportunities, access to health care and education and “protective security,” including unemployment benefits, famine relief, and emergency aid.

In a highly influential essay published in 1990 in The New York Review of Books and expanded upon in his subsequent academic work, Sen estimated that more than 100 million Asian women were “missing” — eliminated through sex-selective abortion, infanticide or inadequate nutrition during infancy.

In recent years, Sen has turned his attention to questions of justice and peace and their relationship to his approach to development. His 2006 book Identity and Violence: The Illusion of Destiny explores the complex interaction of plural identities and inter-group violence. In 2009, he published The Idea of Justice, where he develops a theory of justice that seeks to be relevant to practical concerns.

Sen is the Thomas W. Lamont University Professor and Professor of Economics and Philosophy at Harvard University, a Distinguished Fellow of All Souls College, and a trustee of Economists for Peace and Security. In 2010, Time magazine listed Sen as one of the “100 most influential persons in the world,” and the New Statesman listed him as one of the “World's 50 Most Influential People Who Matter.” He holds more than 90 honorary degrees from universities around the world, and his books have been translated into more than 30 languages.